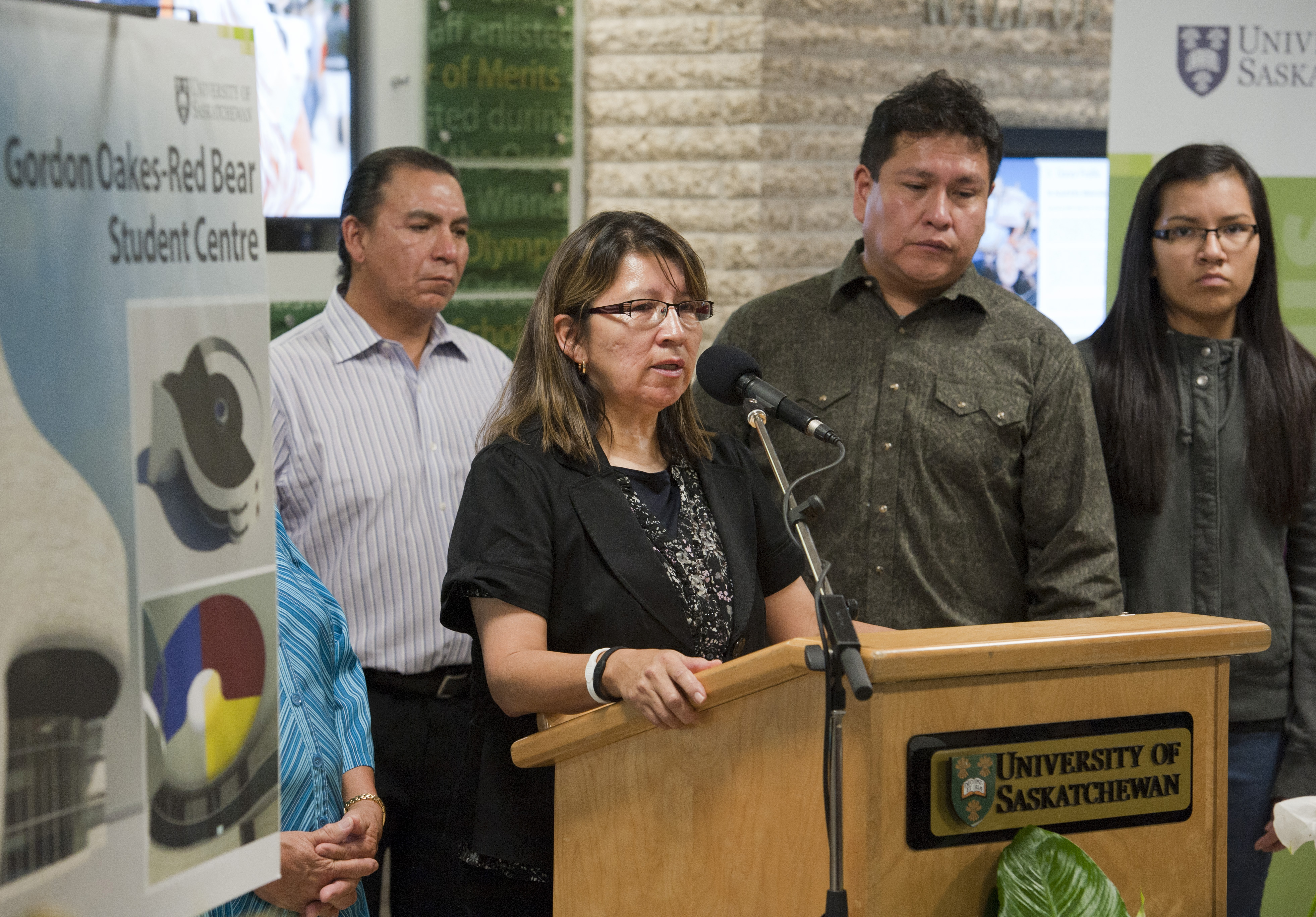 More than a dozen years in the planning, the centre will create a hub for Aboriginal student services on campus as well as space for teaching, learning and ceremony. The announcement and unveiling of renderings of the centre was attended by members of the Gordon Oakes family, including his daughter Irene who told the crowd gathered in Place Riel that the centre speaks to her father's vision of two horses—one representing Aboriginal people, the other non-Aboriginal—working together as a team. Balance is important in teamwork, she said, and the centre represents balance between learning and "keeping your language, culture and traditions … (so) you know what you're all about."

The Gordon Oakes-Red Bear centre will be built in Wiggins Court between the Arts Tower and the Murray Library and its 1,884 square metres will house both the Indigenous Students' Council and the Aboriginal Students' Centre with additional space for learning and ceremonies. When completed, the centre will be "a vibrant inclusive gathering place for all," said MacKinnon.

The centre will be connected to both the Arts Tunnel and a new link to the Health Sciences building.

The initiative was first considered in 1998 when NOVA Chemicals made a $1-million donation to the university specifically for Aboriginal student space. In 2006, the board approved hiring consultants to proceed with the design of the centre, and Douglas Cardinal Architect Inc. was chosen. Cardinal, who is of Métis and Blackfoot heritage, has designed a number of notable buildings including the Canadian Museum of Civilization in Gatineau, the First Nations University of Canada in Regina and the Smithsonian's National Museum of the American Indian in Washington. The design Cardinal produced for the U of S was described by the president as "a stunning piece of Aboriginal architecture."

In an interview prior to the public announcement, MacKinnon said the building is proceeding "later than we would have liked" but he fully expects construction to begin before he leaves office next June. While it will be a celebration of Aboriginal culture and history, the president said the centre "will also be a place that encourages Aboriginal students to think of the University of Saskatchewan as their university too," a sentiment echoed by Irene Oakes, who works in the College of Education, in her remarks Oct. 4.

The late Gordon Oakes (Red Bear) was born in 1932 in the Cypress Hills on what is now called the Nekaneet First Nation. Throughout his life, he was a spiritual and political leader within his community and across the province.

MacKinnon noted in an OCN interview that for many Aboriginal students coming from small communities, a campus the size of the university can be overwhelming. "For many of our Aboriginal students, the campus is the biggest environment they've ever entered," he said, "but if you see in its architecture a symbol of who you are, you'll feel more at home. For me, the Gordon Oakes-Red Bear centre is about Aboriginal students feeling at home and knowing the University of Saskatchewan is committed to their success."

Speaking at the announcement, Ryan Moccasin, president of the Indigenous Students' Council (ISC), said the centre represents "a step on the journey that the university and Aboriginal students share together." He described the supports that will be available in the centre, including mentorship and access to elders, "but what Aboriginal students long for is a home away from home and a sense of community" which the centre will provide.

To celebrate the project moving forward, the ISC held a full-day culture gathering Oct. 5 on the future site of the centre.

Richard Florizone, vice-president of finance and resources, said the university expects the cost of the centre to be "in the range of $10 million but there is further design work needed to finalize the budget." Funding for the project has been a challenge, said MacKinnon, "but no capital project is ever easy. It's always hard to raise money for bricks and mortar" but efforts to find contributors will continue.