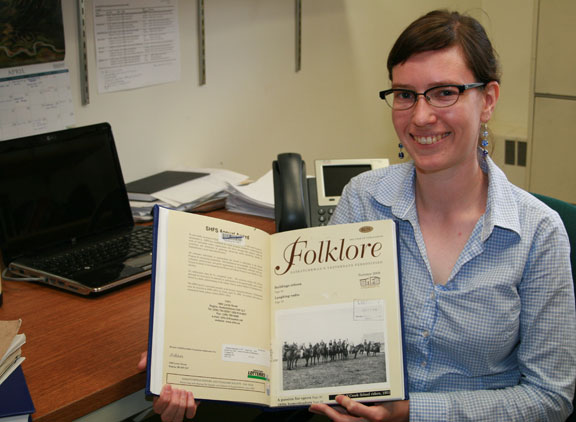 When it comes to the university's special advisor on outreach and engagement, however, one shouldn't be surprised he is actively pushing the envelope.

After 11 years as a professor in the Department of History, Keith Carlson said he had become frustrated with his teaching methods and, to that end, devised a unique assignment for his first-year undergraduate class in January 2011.

Instead of having students pick from a list of essay topics, as was his norm, Carlson asked his students to find a community-based topic to research and write an article about. Because Carlson also serves as vice-president of the Saskatchewan History and Folklore Society (SHFS), he was able to give the students some extra incentive: the chance to have their article published in the Folklore magazine.

"I wanted to teach differently. I wanted students to have an assignment that really got them engaged in research and the community in a meaningful way," said Carlson, who was recently appointed the university's special advisory on outreach and engagement. "It was actually quite exciting for me, because it gave me a chance to mentor undergrads in a way that I am usually only able to do with grad students."

The SHFS was established in 1957 and Folklore magazine has been published for the past 33 years. The mandate for both the society and magazine is "to gather, preserve and share the history and folklore of the area now known as Saskatchewan."

Some of Carlson's students wrote about a topic from their personal history—such as family struggles during the Second World War—while others researched landmarks or significant historical events linked to their hometowns like the Shell Lake massacre and the Weyburn mental hospital.

While he had initially hoped at least one or two of the articles would be publishable, once the assignments started rolling in it became clear he had underestimated his undergrads. A total of 13 essays ended up making the cut, and in the spring of 2012, an entire issue of Folklore was devoted to the students' stories.

"It really was a win-win-win situation," he said. "The assignment enabled me to do something different in the classroom, it gave the students an opportunity to do engaging research and get published, and it was a win for Folklore as well because they are always looking for new writers and younger readers."

Alex Deighton, one of the students whose article was published, grew up just blocks away from the Broadway Bridge and satisfied his longstanding curiosity by researching its construction. The process mainly involved combing through piles books and microfilm at both the provincial archives and the Saskatoon Public Library.

The work was exhaustive, he said, but gratifying. "The project itself was really different from your standard, first-year assignment," said Deighton. "I'll admit a big reason I put so much time and effort into the project was because of the opportunity (to be published)."

In addition to this undergraduate research project, Carlson also partnered with Folklore to develop an innovative graduate fellowship opportunity. While the magazine's editor was previously employed on contract, come fall a grad student will be acting as editor for the magazine thanks to a fellowship that is cost-shared between the Folklore Society ($7,000 annually) and the Colleges of Arts and Science and Graduate Studies and Research ($8,000 annually combined).

Frances Reilly, a PhD candidate in history, received the inaugural two-year fellowship and in addition to working on her dissertation, will be occupying the editor's desk at Folklore beginning in September.

She estimates serving as editor of the magazine will require about 12 hours of work per week, and she plans to start including more articles exploring "untapped histories in the province," such as the Chinese community and the experiences of women in Saskatchewan.

"In the history department, we are generally trained to be professors or teachers but there are so many other opportunities within the discipline, so I'm really looking forward to working in this other area," said Reilly.

Finn Andersen, executive director of the SHFS, said these connections with the U of S have helped breathe new life into his organization. He also noted that having Carlson sit on the SHFS's board of directors has significantly helped expand their objective to engage more young people in the organization and, in particular, the Folklore magazine.

"History is not static," said Andersen. "Our understanding of the past is ever changing and it is therefore extremely important that we seek new perspectives on the past and in order to get this new perspective, we need to engage every generation in the study and interpretation of our past."

Kirk Sibbald is a communications officer in the College of Arts and Science.