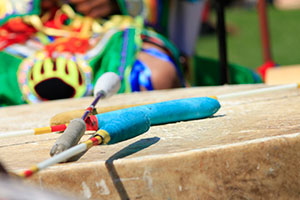 "…together we identified Aboriginal engagement as a priority in Promise and Potential, our third integrated plan, and it is something I am personally committed to, " said President Busch-Vishniac in a recent letter to the campus community. "The U of S has historically been a leader in this area and it is time now to revisit where we have been successful, and look ahead to opportunities that will allow us to do more in the future."

Four events held as part of Aboriginal Achievement Week – the pipe ceremony, flag ceremony, feast and round dance – are deeply rooted in Aboriginal tradition and customs. Saskatchewan has six language groups – Cree, Saulteaux/Nahkawē, Lakota, Nakota, Dakota and Dene. These language groups all have different customs in regards to ceremony, hunting, song and dance, arts and traditional practices and therefore different ways of conducting each of these ceremonies.

The following is an overview of the history, customs and traditions that may be associated with these four events.

A pipe ceremony is a spiritual time where tobacco is placed into a pipe bowl and prayers are rendered by an Elder/Traditional Knowledge Keeper and blessed by the smudge of sweet grass, sage or cedar. The pipe ceremony is a very highly honored rite that is only given to certain people such as an Elder, Leader or Traditional Knowledge Keeper.  In some areas only men are allowed to smoke the pipe while women observe (Saulteaux/Nahkawē, Cree and Nakota), and in others the pipe is shared to smoke with men and women (Lakota, Dakota and Nakota). Some First Nations have women pipe keepers that only the women are allowed to smoke.

This ceremony is used for many different reasons such as blessing, honouring, commemorating and paying respect to a deity, or may be held to pray in a humble way. A pipe ceremony could be 30 minutes to two hours in length depending on the Elder/Traditional Knowledge Keeper and what First Nation they come from.

A long time ago, Aboriginal groups used the eagle staff or lance as an identification of nationhood. This staff/lance was taken into battle to control the movements of warriors and identify the tribes in battle, and was adorned with feathers, furs and even locks of hair from a buffalo or enemy.

After contact and implementation of the reserve system, Aboriginal people joined the Armed Forces for Canada. As the war veterans came home from World War I and then II there were many celebrations in their honour, such as feasts, giveaways, ceremonies and powwows. At these special gatherings they would use the eagle staffs and incorporated the Union Jack and Canadian flag. They were proud to fight under the nation's flag and for this reason it was taken in to ceremony. Songs have been composed for the flags of Canada and the United States of America. The Treaty 6 flag also has a song and history behind it and this song will be used at the formal flag ceremony.

A feast is a special time to pray and reflect on the blessing nature has to offer. Food is seen as a medicine after the prayer and feasting occurs for many different reasons, such as memorials, honourings, celebrations, feeding the spirits or even settling disputes. A traditional feast would have wild meat soup, bannock, berries and maybe a type of grease. Long ago fat from a wild animal was a highly prized commodity and was used as a special treat. Eating commences only after the prayer is rendered. Participants sit on the floor or ground.

Round dances may be used as a social event or spiritual event depending on the First Nation and situation. They usually begin at sundown and go to the early hours of the morning, and can be shared in by anyone. The round dance starts off with a feast and prayers, and offerings of tobacco and cloth to the Elder or leader of the ceremony. Special songs are used to open the dance. The singers use hand drums or the big drum to sing many different spiritual or self-composed songs where spectators gather around the singers and dance in a clockwise direction. The dancers hold hands to symbolize unity and the circle of life.

Some round dances are held to remember ancestors in memorial gatherings. It is said that the northern lights are the ancestors dancing in the heavens and that is where the round dance ceremony came from - mimicking the motions of the northern lights. Some round dances are a social event that brings people together to mingle and enjoy the company of friends and family, but continue to be rooted in spirituality and culture. The ITEP round dance will have two announcers who traditionally were the camp criers, the stick man or arena director, singers and dancers, who could be anyone who wishes to dance.

Unique to this year's Aboriginal Achievement Week, the university will host the first of a two-part Aboriginal Symposium. Part I: Taking Stock will celebrate achievements related to the Aboriginal framework, raise awareness across campus of current Aboriginal initiatives and celebrate their success. This event was identified as a commitment in the third integrated plan.

All events held throughout the week, including the Aboriginal Symposium, are open to the campus community and the general public. For more information, including a schedule of all events, please visit www.aboriginal.usask.ca.