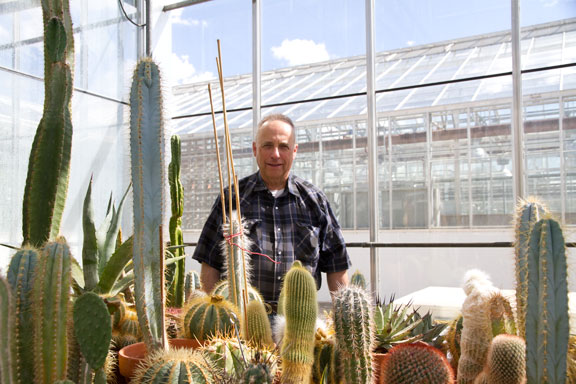 "I'm known mainly as the dead body guy for the RCMP," said Walker, a professor in the College of Arts and Science who has worked on a number of high-profiles cases including identifying remains at Robert Pickton's pig farm in BC, and doing the analysis that led to the conviction of serial killer John Crawford.

"In that part of my life, I see a lot of nasty stuff and so having cacti, something I love, balances it out," explained Walker, who became fascinated with the plants while doing his PhD at the University of Texas more than 30 years ago. "I'm a desert, Great Plains guy. I just love the dry arid environments where you find cacti."

Since his time in the American Southwest, Walker has amassed a collection of the prickly plants that numbers in the thousands.

"My house is full and my backyard is full and they started overflowing," he said. "It was driving my wife crazy."

So Walker made arrangements with the university greenhouses to "make some space for the overflow and the ones that are too large for my house. It's not research per se, just an interest of mine. I come to the greenhouses religiously. It is great in winter when the weather is especially horrible."

The collection in the greenhouse, called "Puerta del Sol" or gateway to the sun, is a popular tour destination for school kids as well. "They come through for school tours and I often get notes from the kids telling me how much they like the cacti."

Beyond cacti, Walker also collects other desert plants including yucca and agave, which, he pointed out, is used to make tequila, "I love tequila, but I don't make my own," he said with a laugh, "I buy the good stuff."

Walker has a hard time picking out just exactly what it is about the desert plants he loves in particular. "There are millions of things I find fascinating, from the ethnobotany of them to the ecology. But when they flower, they are absolutely beautiful. You have to love them if you're willing to get stuck with thorns."

A self-described "cactophile and old desert rat," Walker gets down to Arizona once a year to get his fill of arid, dry weather, visit greenhouses dedicated to cacti and to look at the tree-sized saguaro cacti—"like the Taco Time logo"— that can live to be 120-140 years old.

One has to wonder why a guy who loves the desert weather and the varied species of plant life that grow in those climates chooses to live in Saskatoon, where only three types of cacti grow naturally.

"There is nothing like the summers in Saskatchewan," he said with a smile. "It's just too bad that there is also nothing like our winters."

At least during those one-of-a-kind Saskatchewan winters, he still has the university greenhouses as his sanctuary.