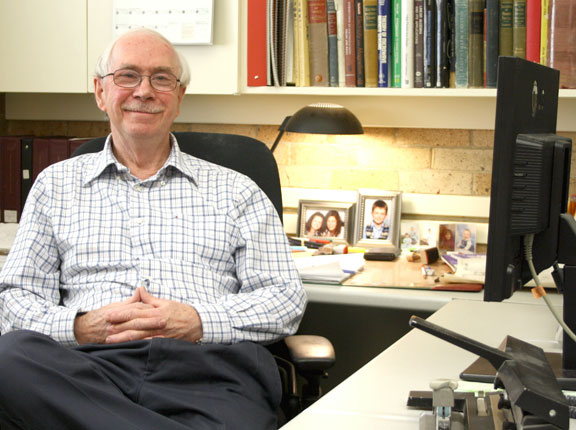 For his doctoral dissertation, Sofko, an engineering physicist, designed and built an instrument that measured the polarization state of radar-auroral signals, and the study of the aurora borealis became his life's work. By 1963, he was invited by department head Balfour Currie to join the team of physicists at the university's Institute of Upper Atmospheric Physics, which has since been renamed the Institute of Space and Atmospheric Studies.

Moving into his second half-century as a researcher and teacher, the 74-year-old continues to keeps regular office hours, continues to conduct research on the northern aurora using the university's Super DARN (Dual Auroral Radar Network) installation, and continues to publish.

He has also kept his hand in teaching. "This past fall I taught a graduate course in radio physics and after Christmas, I taught a grad class in magnetosphere physics," said Sofko, adding "I'm also the co-supervisor of two graduate students."

Sofko's lists of accomplishments are extensive, but much like a prospector looking for the next nugget of gold, he has never lost his enthusiasm for discovery. One example shows how solutions are often in the cards.

"For 40 years, people having been arguing about what causes magnetic storms, and nobody ever took into account the true geometry of the field lines on the night side of the earth," he explained. Since the explanation primarily involved geometry and not physics, most of his colleagues in the field were not that interested but Sofko attempted to solve the mystery with vigor. Then, the solution would come when his mind was miles away from the world of physics.

"I was playing a game of solitaire and all of a sudden I just about jumped off my chair," beamed the physicist. "Boom! The answer came to me – just like that. I thought, oh my God, it's so simple – if you take into account the shape of the fields lines, it turns out you can explain virtually every aspect that goes on in a magnetic storm,

Sofko originally envisioned writing one small paper, but "now I'm in the process of writing three big papers explaining how this magnetic sub-storm works, and it's all geometry of the magnetic field. My wife says I should play a lot more solitaire," he said with a smile.