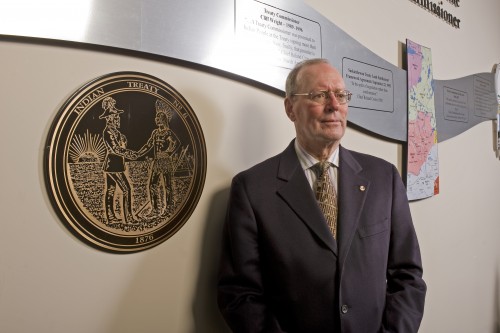 Miller is Canada Research Chair in Native-Newcomer Relations and is known as the author of Canada's first comprehensive historical account of the Aboriginal-Newcomer relationship—Skyscrapers Hide the Heavens: A History of Indian-White Relations in Canada, published in 1989. He also authored Shingwauk's Vision, the first complete history of Canada's residential school system that has been used for context and reference by Aboriginal political leaders, public servants and lawyers involved in resolving abuse claims.

"Jim's extensive research on Aboriginal history is unique in Canada," said Peter Stoicheff, Dean of the College of Arts & Science. "Our college, university, province and country are indebted to Jim for his work, which has shed a light on many critical issues in this area."

His pioneering work on the history of treaties in Saskatchewan and Canada have helped Saskatchewan and the rest of Canada move forward in understanding that the treaties are a fundamental building block of Canada's history as a nation. He co-authored Bounty and Benevolence: A History of Saskatchewan Treaties (2000) and, more recently, Compact, Contract, Covenant: Aboriginal Treaty-Making in Canada (2009).

Miller has worked closely with Saskatchewan's Office of the Treaty Commissioner (OTC) as a frequent adviser and was closely involved in developing the OTC's education program entitled Teaching Treaties in the Classroom—a curriculum guide designed to help teachers in Saskatchewan explore the topic of treaties with their students.

Miller, a celebrated historian, is a Fellow of the Royal Society of Canada and won the 2010 Gold Medal for Research Achievement from the Social Sciences and Humanities Research Council.