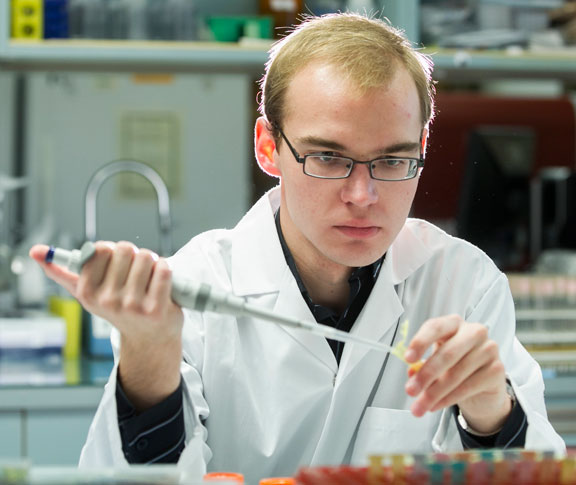 Despite what looks like a punishing schedule, the biochemistry student remains remarkably unflustered.

"I haven't had to consciously balance. Everything just seems to fall into place," he said.

Adams' commitment to academics, arts and community was recognized in June when he was named one of Canada's Top 20 under 20, the sole Saskatchewan name on the list (he turned 20 in February). The program, offered through the charity Youth in Motion, recognizes young Canadians whose "leadership and innovation has led to the betterment of your school, community, province and country."

Adams has amassed an impressive record of both academic excellence and volunteerism, from mathematics and music competitions, to working with the Saskatoon Food Bank. He is president and chair of the Saskatoon Regional Science Fair, which is coming to the U of S campus in April 2014. He is also a member of the Greater Saskatoon Chamber of Commerce Business of Science committee and a member of the steering committee of Sanofi BioGENEius Challenge Saskatchewan.

As a former volunteer piano teacher with the Heart of the City Program, he taught a small class of inner-city children. He continues his own study of piano under the guidance of Kathleen Solose in the U of S. He explains science and music both engage creativity in complementary ways.

"Science is both analytical and creative, to think of new solutions and to have an open mind for new solutions," he said. "I think that's where the music and creativity really ties in."

Adams embraces not only his studies and musical pursuits, but campus life as well. He serves on the academic affairs committee of the University of Saskatchewan Students' Union and is the undergraduate student representative on the TransformUS academic program task force. He has received numerous scholarships, including the U of S's George and Marsha Ivany President's First and Best Scholarship.

Adams will enter the College of Medicine this August to pursue a medical degree and eventually a PhD, the first steps to his goal of becoming a professor and clinical research scientist.

"I thought it would be a great fit to combine my interest in research and medicine to perhaps be a physician scientist so that my work with patients will help inform research," he said.

With two years of biochemistry under his belt, he works as part of biochemistry Professor Ron Geyer's research team. There, his task is to help develop synthetic antibodies that will attach to receptor molecules on the outside of cancer cells. The team is working to improve both diagnosis and treatment of cancer.

While many undergrads are just beginning their research careers, Adams has been at it since his Grade 9 year at Saskatoon's Walter Murray Collegiate. At 16, he was working under the mentorship of U of S plant scientist and Canada Research Chair Ravi Chibbar, using a novel technology to study the function of genes in wheat to better understand how the plant makes starch.

"I saw it as an opportunity. How could I miss out on this great opportunity with a professional scientist in a university lab?" he said.

The work won him the national Sanofi-Aventis BioTalent Challenge and sent him to represent Canada at the Sanofi-Aventis International BioGENEius Challenge in Atlanta, Georgia. Adams' contribution could advance efforts to create wheat varieties to address issues such as obesity, heart and colon health.

Adams graduated first in his high school class of more than 350 students, and received the Governor General's Academic Bronze Medal for academic excellence.