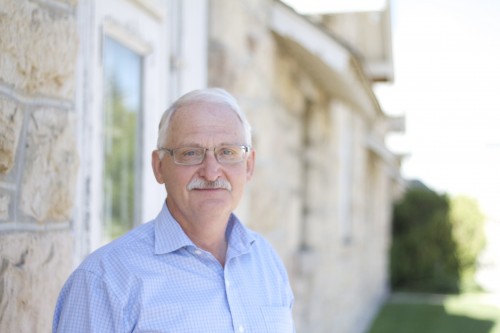 "It's because I look old," said Ernie Barber with a laugh about the talk around campus on his plans for the future. "People probably look and say ‘he takes a job but not for the long term, he must be retiring.' But the answer is that I take positions in which I can best serve the university."

Before deciding to step into any new role, Barber says he asks himself two questions: "Is this something I think I can do at a high enough standard that I will serve the institution well; and am I the right person? Is there somebody else whose career will be sidetracked in anyway if I take this role on?"

Once those questions are answered, he gets ready for a new challenge.

"I don't see it as any kind of yeoman's service at all. I tell you, and I want you to understand my sincerity, I absolutely feel privileged to have had the opportunity to do interesting things at this university in a whole wide array of roles. Not everybody gets the chance to do that and I quite frankly don't know what I have done to deserve it because it really truly is a blessing," said Barber who is now in the job of deputy executive director and chief operating officer of the Global Institute for Food Security (GIFS).

"GIFS is a wonderful project and I was fortunate to get involved in the beginning as it was coming to life a couple years ago," explained Barber, who will work with the institute's executive director Roger Beachy in the coming months to make sure GIFS gets started on the right path.

"I very much see it as a project, not a long-term thing, but my goal is to be here for GIFS to get it firmly established, to assist with that early stage building and also provide some stability in the transition from Roger as interim director to a permanent director. I see it as a year, plus or minus."

Barber, who is "technically on an administrative leave right now" will dedicate three quarters of his time to GIFS with the remaining time spent on various projects of interest to him, including finishing work on an academic plan for a school of architecture, studying industry-academic partnerships and participating in initiatives to build greater presence for the University of Saskatchewan in the North.

"We spent the first 100 years looking south, now we have also to look north. We will not be able to say we engage the north until we give it the same priority as the south. Nursing and education are success stories, but we don't have the same success in many other areas. We need to find a better way to do that.

"For me, there are tons of things I feel I could do at the university, but which ones do you do? It's about timing and fit."

And while Barber isn't sure what's in store after this year, he is sure of one thing: "I plan on being on campus for a while yet."