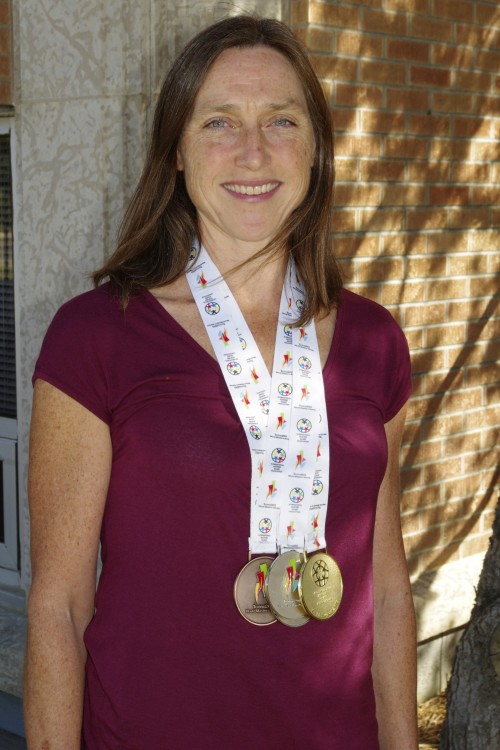 "I have to exercise to stay grounded and focused. I know that about myself," says Colleen Walker, administrative co-ordinator in the Division of Audit Services.

Swimming at the competition was a bonus in itself. Walker was enlisted to participate in the games as a soccer player. She, along with several other university employees, played on the team that competed in the 50+ women's division. Another women's team, in the 45+ division, and a men's team in the 55+ division from Saskatoon also competed. Walker's soccer team made it to the playoffs, but lost in the first round.

After she decided to go to Turin as a soccer player, Walker learned that she could compete in individual sports as well. Her three children encouraged her to sign up for the swimming events.

Walker didn't train per se. She has been swimming with the university's masters swim club for the past 17 years. She's in the pool a couple of times a week. She rides her bicycle to work, plays soccer and runs regularly.

Being active and staying fit takes effort; it just doesn't happen. Walker's three children live at home: one is a student at the U of S, one is working and the youngest is in high school. She also has a niece who lives with them. In addition to running a busy household, Walker works half-time at audit services and one day a week at St. Andrew's College as the co-registrar. She is also a student herself, working on a master's in theological studies at St. Andrew's.

"I really have to balance well to make that all fit," she says.

Using her lunch break as an exercise break is one way she makes time to stay in shape.