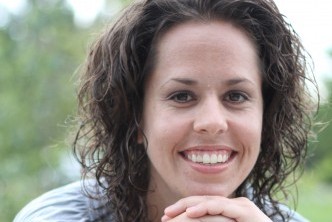 So it was almost a dream come true for the assessment analyst from the University Library to don the cleats, pads, helmet, and red and white jersey of Team Canada and be part of a silver medal-winning performance at this summer's International Federation of American Football (IFAF) Women's World Championship in Vantaa, Finland. A Canadian girl playing full-tackle American- rules football in Finland is a long way from La Ronge where Polischuk first realized she was made for football.

"Since the very first time I played football, which was Grade 3 recess with the boys, I've loved it. I could run, I could throw and I could catch, the three ingredients that allowed me to play with the boys but it's like the chemistry between a boyfriend and girlfriend – sometimes it works and sometimes it doesn't. For me, it worked."

There was no organized football for boys or girls in La Ronge but after moving to Saskatoon, Polischuk sought out every opportunity she could find to play the game – flag football, touch football, university campus rec league ball, "any kind of football I could get myself into."

The appeal, she said, "is the game itself, the chess match combined with the athleticism. Brains and brawn. It's not one or the other; you need both."

For 15 years, Polischuk quarterbacked her touch football team, displaying not only leadership qualities but a special touch with the ball. "I can throw a long bomb but it's my precision that earned me the spot."

Then, three years ago, with the establishment of the Saskatoon Valkyries of the Western Women's Canadian Football League, she finally got the chance to play a new kind of football—full tackle.

Going into tryouts, "I was 34 years old and thinking that I desperately want to be on the team, but am I too old? I was starting when most people are thinking about retiring. And it's one thing to play touch but I didn't know how to tackle. All these things go through your head."

Despite her doubts and a recurring back injury, Polischuk made the team and, along with all the other women, learned step by step how to tackle. "It's so much about technique and form," she said. "You don't just start by running down the field and tackling someone." Speed and strength play a part but it is form that ensures success, form that can only be honed over weeks, months and years of training and playing.

"As the coaches say, you know you love it when you practice as much as you do for so little playing time. But it's still worth it for that one tackle, that one interception, that one batted-down ball."

Of all the new skills she had to master, Polischuk said none was harder than the open-field tackle.

"When someone's running at you full speed and you're running at them, it's an almost impossible tackle to make. When you're itching to make a tackle and the person dekes you out and blows by you, it's like, ‘awww' but when you do make the hit, it's just like a hole in one."

In her second and third years with the Valkyries, Polischuk concentrated solely on defense. The team captain got a defensive touchdown this year, a rare occurrence in the league, and helped the team win its third consecutive championship in the nine-team league.

Through the 2012 season, Polischuk also played for Team Saskatchewan against other provincial and regional squads as part of the try-out process for Team Canada and the international championship which is held only every three or four years. A total of 10 Valkyries made the national team with Polischuk assigned to defensive corner and special teams.

With players from across the country, Team Canada did not come together until the women arrived in Finland in late June. An intense training camp there was followed by pre-tournament practice and then three football games in four days. Polischuk described it as "intense," possibly an understatement.

Game one was against a young and inexperienced Spanish team; Canada won 50-0 but they came away adoring the Spaniards' sportsmanship and love of all things Canadian. Spain cheered Team Canada on throughout the rest of the tournament.

Game two, against Finland, was more challenging. "They surprised us right out the gate and then the nerves started kicking in. Suddenly it's half time and we weren't winning the game. At the same time, we knew we weren't playing to our potential. In the second half, they were starting to get frustrated and we came back to win." Final score: 34-12.

That moved Team Canada into the gold-medal final against the U.S. "Going in, we knew they were potent;" in two world championships, only the Germans were able to score against them, and Germany lost that game 107-7.

Looking back, Polischuk said it was "just one of those kinds of games when it just wasn't happening. We got close once but it was turned back on a penalty and it just took the wind out of our sails." Canada lost 64-0 but she pointed out with a laugh that in the 2010 championship, Canada lost to the Americans 66-0 "so we've improved by a couple of points."

Polischuk's overwhelming feeling about the world championship was pride "in being able to represent Canada and in that we're hopefully paving the way for future football players. If we're going to get throttled this year, so be it; some day there's going to be a Team Canada that's going to blow the States away."

She expects to play at least one more year for the Valkyries but Polischuk knows calling it quits in tackle football won't be easy.

"You almost can't explain what it's like to play on a football team with women of all shapes and sizes and ages. It's just this interesting sisterhood that's created and it's going to be hard for me to leave."

At the same time, she knows she and her teammates have been groundbreakers when it comes to women's tackle football.

"We don't not stink after a game and there's lots of trash talk, just like in men's ball, but it's an absolutely legitimate sport for women. I would be happy to see the same opportunities at every level for females as there are for males starting with flag football and working into tackle in high schools and at the university level.

"I will be happy when young girls don't realize there once was a time when they couldn't play."

While the profile of women's football is growing, it still has a ways to go. "The stupidest question anyone has asked me when they found out I play football is, ‘Do you play in the Lingerie Football League?'"

Polischuk's response was short and to the point: "Seriously? I'm going to tackle you."