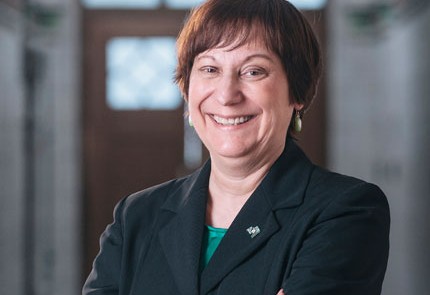 Using the account @UsaskPresOffice, Busch-Vishniac has taken to Twitter as a way to "whisper out loud" about both her official work as president and her personal life outside the office. On the professional side, she may tweet after a particularly interesting meeting, comment on an issue or call attention to the work of others. On the personal front, the account gives the president the opportunity to reveal herself more fully.

"As president of the university, I gave up my privacy," she said. "I'm not complaining; it's part of the job. I would never tweet anything personal that would embarrass the institution but I think people don't get to see enough of me interacting with people, or dogs, or living in the residence. It's a way of showing a more personal side of me."

Although her account specifies it is from the office of the president, Busch-Vishniac is careful to differentiate her personal and office messages; any tweet that ends with "–IBV" is hers while others may come from staff members in her office.

The appeal of Twitter, she said, is that "you can reach people quickly, you hear about things you might not otherwise hear about, and it's chatty."

She offered two examples. In one case, she was able to follow "blow by blow" arguments in the Supreme Court of Canada on an issue of interest to First Nations communities, and people's reactions. "I can read about Rob Ford in any media outlet but nowhere was I able to read about this except Twitter." In the second, she found reference on Twitter to a book of interest that she might not have heard of otherwise.

"The only downside of Twitter or any social media," she continued, "is the raised expectation of being available all the time, and I don't have a huge amount of time."

Although new to Twitter, the president already follows 193 accounts. Many are internal – various student organizations and academic units – but the list includes government officials, her U15 peers, local and national media outlets, and businesses in the city as well as causes that interest her. As of Nov. 20, she had 353 followers.

And like most tweeters, Busch-Vishniac finds that "every now and again, the 140-character limit is about seven too few."