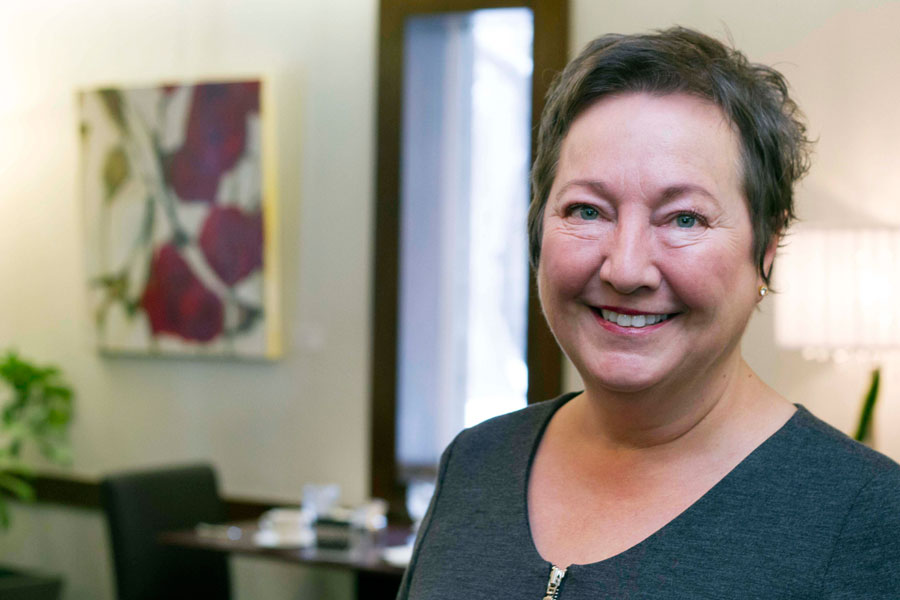 "It's the relationships I've made over that time that are most special to me," she said. "I've gotten to know so many people. I've planned weddings for club members, their kids and now their grandkids. I've planned anniversaries, and celebrations of life. That's something special."

It was a career path that almost didn't happen, said Cram, who followed her husband to London when he was accepted to do his PhD at the London School of Economics.

"Before that, I was doing marketing at an insurance agency. When we were in London, that's when I got interested in cooking to fill my time," she explained. "I took a class called basic cookery from the chef at the Savoy Hotel. He took me and the class to the first food show I ever attended and I totally fell in love with it."

From there, Cram enrolled in Le Cordon Bleu culinary school that was down the street from where she lived in London, and the rest, as they say, is history.

"When we came back to Saskatoon, I planned to open a bakery that would serve lunch but before that happened, I took this job and 25 years later, blink, here we are."

Many special events have filled the past 25 years, said Cram, including about 750 weddings that have been held at the club. While she doesn't have any tales of Bridezillas to share, she does have one near disaster that occurred during her watch.

"The morning of the wedding, the bride and her mom dropped off the wedding cake that the mother had made. They handed it off to the chef in the walk-in cooler and it slid off the base and hit the floor," she recalled. "The chef at that time quickly scooped up the cake and assured the bride that she could fix it. It was fixed and redecorated and no one was the wiser. That was the worst thing that happened."

Cram more readily remembers the good times, like the note-worthy diners that have passed through the club over the years, including Sons of Anarchy star Kim Coates, CTV news anchor Lloyd Robertson, Buffy Sainte-Marie and "all of the premiers of Saskatchewan during the past 25 years."

Another highlight for Cram, in addition to the weekly roast beef and Yorkshire pudding buffet that happens at the University Club every Thursday, "which along with our homemade soups, is everyone's favourite," was her involvement in the re-opening of the Atrium cafeteria at Innovation Place in 1996 and the opening of Boffins Club in 2000.

"But I think what I am most proud of is that we endured. When I started 25 years ago, there were 29 faculty clubs in Canada, now there are only about nine."

Built in 1912, what is now the University Club wasn't originally a club at all, but rather the home of the university's dean of agriculture who used the basement to house students just back from the First World War. Since the switch from residence to restaurant, a number of other changes have followed including replacing Faculty Club with University Club, furniture updates, renovations and perhaps most controversial of all, Cram said with a smile, "removing the billiards table to make more room for private dining. That one is still brought up by some of the older members."

Other than never surpassing the 1,000 paid members mark— "that's the one goal I always hoped to achieve"—Cram has few regrets and even fewer complaints.

"I have one of the best jobs on campus. Who gets to go to work everyday, plan parties, be around fabulous food and great wine, and get paid for it? I just love my time here and anyone who gets to say that has won the lottery."