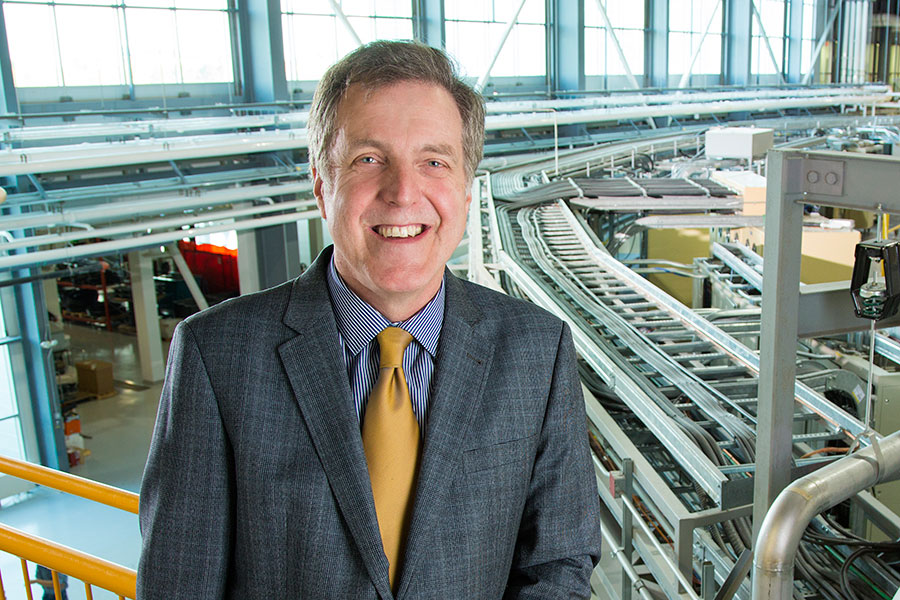 "The cool thing is that once you make the jump across the Pacific, Canada and Australia are pretty similar culturally," said Lamb, who is the new executive director of the Canadian Light Source (CLS). "And we have the same woman on our money. The one major difference is the weather, and what a difference."

Since arriving in Saskatoon to take up his post at the CLS this past August, Lamb, who was the founding director of the Australian Synchrotron in Melbourne, has been getting familiar with the city, the university, the facility, and its scientists and staff.

He has loved everything he has seen so far, but what really stands out is the CLS itself, which he puts as one of the best in the world.

"Lightsources are among the best scientific tools in the world," said Lamb, adding that he spent half his life in Australia and the other half working around the world including Hong Kong, England, Germany and the U.S.

"I'm like a universal moth, drawn to synchrotron light," he said with a laugh. "Very few people have been director of two national light sources."

Lamb said the CLS is "simply a light, but it is the brightest light in Canada. Whatever you can shine this light on we can give value to that observation."

He uses an analogy of how eyesight changes with age to explain what the synchrotron can do. "The text gets harder to read, so you hold the page further back and further back (to read) until your arms can't stretch any further."

But if you shine a light on the page, he continued, all of a sudden the text gets clearer and sharper in focus. "Now imagine the universe's most perfect light, not only will the text become focused, but the light can detect the ink, the paper's structure, the interaction of molecules and atoms of the ink and paper. That's what we have here, the most perfect light."

Lamb wants to use that "perfect light" to add value to areas of expertise at the university, Saskatchewan and Canada, using agriculture and mining sectors as examples.

"Imagine you have a million acres of a crop here in Saskatchewan and we were able to improve the growth of that crop, even just subtly by one per cent. Consider mining and minerals and if we improved processes by even a fraction of a per cent. These minor improvements could result in billions of dollars."

The key, he continued, is to apply the best scientific tool in the world to add value, and Saskatchewan has "vast opportunities to tweak things by a small percentage" for big gains.

He has seen small improvements result in big gains in his own scientific research in material coating, for which he has developed numerous non-stick coatings for industrial use.

"It is important that we continue to look at the world around us and discover more about it, but it is equally important that we use that understanding to make the world better for the people in it," he said, adding that work with big industry, like pharmaceuticals, is a great example.

There will be more opportunity to work with industry in the years ahead because "this (CLS) is a magnet. It is growing larger and attracting investment—it is the largest scientific infrastructure investment in Canada, with a replacement value of $360 million—and attracting more users. We are already receiving applications at 160 per cent of capacity."

To meet that demand, Lamb said seven more beamlines are in development. "I see it more than just a service and supporting operation. We add our own science and technology to the mix."

As the CLS approaches its 10th anniversary—its first user was in May 2005—Lamb said he wants everyone in the community to know what the lightsource, which has a $2 million annual electricity bill, is and what it does.

"We have a thousand annual users and we train and educate hundreds of U of S students here, but we also want the public to come in and see what we do. There will be a noticeable increase in our community engagement work in the year ahead.