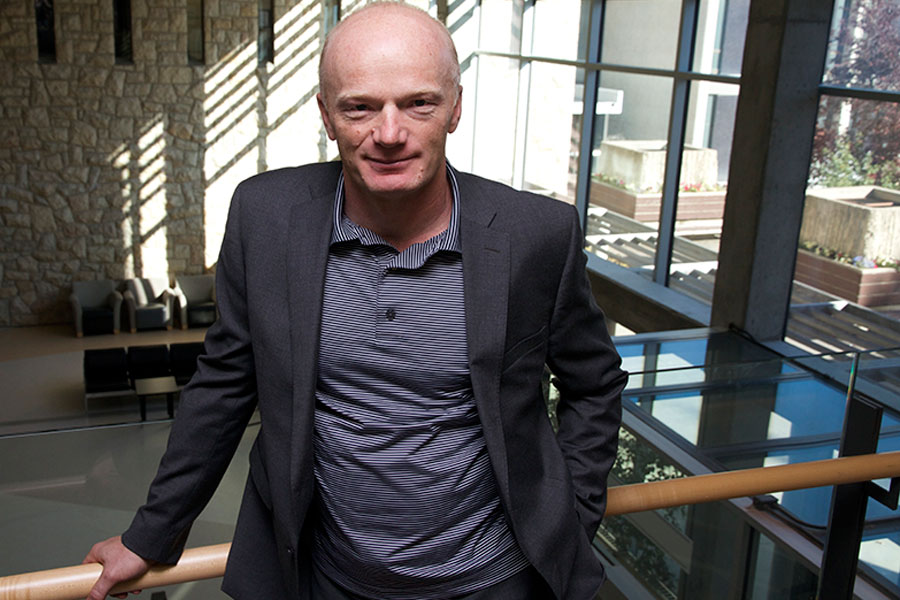 At 51, Bruce Gordon is one of the oldest law students enrolled at the College of Law. He is married, has two adult children and a new granddaughter. After retiring from the Saskatoon Police Service in 2012, Gordon moved to Vancouver to take a job with BC Justice. He had no sooner settled on the coast than he received the news he was accepted into the College of Law. And although he wasn't necessarily looking for a change, he was glad to be given the opportunity. "Law school was always in the back of my mind and I finally found myself in a position where I could pursue it."

Now entering his second year, Gordon admits that the transition from sergeant detective to law student hasn't been without its challenges.

"My biggest challenge has been relearning how to learn. During the first term I sat in class trying to not only understand the material, but also figure out how to set up the materials and study the materials."

He especially, and surprisingly, found himself struggling in his criminal law class. "Understanding some of the concepts and theories behind the law was difficult for me because my career had focused on the practical application of it. It was like starting over again and looking at the law differently."

On the other hand, Gordon feels like his life experience gives him an advantage in classes like wills and trusts. "I've signed contracts, I've had mortgages and I've dealt with all sorts of various legal issues, so some of my practical understanding was more relatable in those classes."

As for fitting in with his new set of peers, many of who are half his age, Gordon found everyone very welcoming. "I wasn't sure how I would be received by students and professors, but I was surprised by how readily I was accepted—there was no negative feedback towards my policing career." Gordon hasn't shied away from becoming involved either. Last year he served as faculty representative for the Law Students Association (LSA), placed third in the Dentons Negotiation Competition and participated in the LSA hockey tournament.

Adjunct Professor Norman Zlotkin attested to Gordon's enthusiasm to be involved in the law school experience: "Bruce is a strong and positive leader of the student body, and widely respected by his classmates," said Zlotkin, also noting that Gordon was instrumental in bringing Ernie Walker, one of Canada's leading forensic anthropologists, to the college as a guest speaker last year.

Associate Professor Glen Luther said Gordon is a valuable addition to any class where his experience can assist his classmates to understand the realities of the law in action. "I have found that experienced police officers like Bruce Gordon will often have relevant input into how the law applies to any given situation. I have been impressed how Bruce has interacted with his classmates (who are often a generation younger) and how supportive he has been of them."

While it may be a treat for other students to have Gordon's input in the classroom, it is he who considers himself to be lucky. "I'm not just saying this because it sounds good, but I am truly grateful for the opportunity to study here. Every day is a great day here and I believe that is how it should be."

Gordon promises that he will carry his gratitude with him throughout the rest of his career. He is still not certain where that career will lead, but he hopes it will include helping people in the lower socioeconomic class.

"Through my police work I dealt with cases involving child sexual abuse and missing or murdered women and I would like to continue to work in supporting those causes—whether it's solving cases, or bringing about a change where there is more emphasis put on solving those cases."

His advice for people who may be considering enrolling as a mature student: "Don't be intimidated by returning to school. Throughout the last year and a half, I've met a lot of people who said ‘I could never do that'. My advice is ‘Yes, you can.' Specifically at the College of Law—I really want to emphasize my absolute happiness with the support of the college staff and faculty. They not only want me to succeed, they want every student to succeed."

Sarah Trefiak is communications and alumni officer in the College of Law.