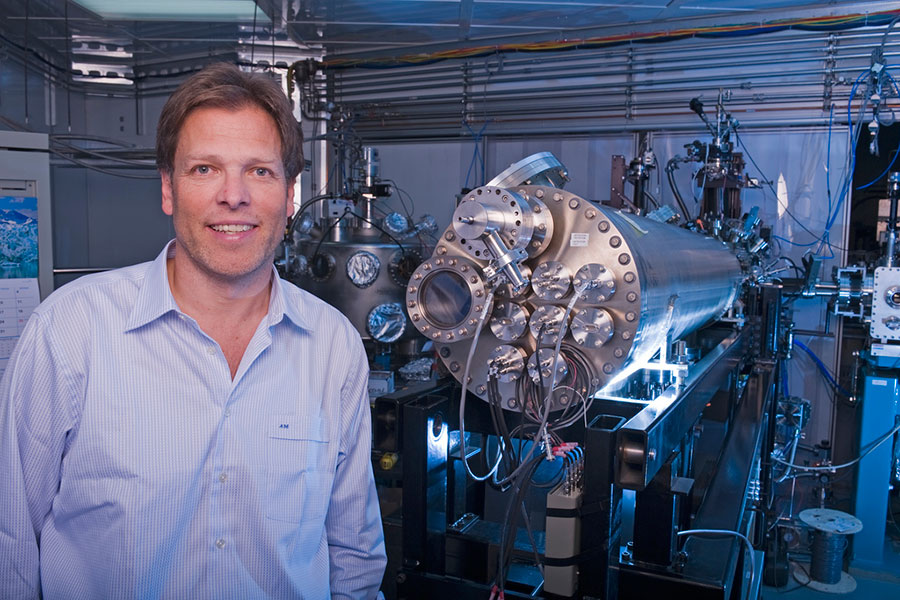 Led by physics professor Alex Moewes, Canada Research Chair in Materials Science with Synchrotron Radiation, the Beamteam's members are an unusually talented and productive bunch. Moewes tends to foster young scientists with the drive to try ideas out on their own and the results of his graduate student program speak for themselves. Five students graduated from the team last year, all of who have made important contributions to their fields of research.

John McLeod, the most prolific paper-writer of the group, spent his years on the Beamteam studying the electronic structure of advanced materials. This research spanned investigations of porous silicone TNT detection, new varieties of superconductor, and potential applications of amorphous selenium in X-ray imaging. The result was a total of 23 peer-reviewed papers, an incredible amount for someone still in graduate studies.

"John is a machine. He puts out papers incredibly quickly," said Moewes.

McLeod was awarded the U of S Governor General's Gold Medal, the top award for excellence at the university and has moved on to become an associate professor at the College of Nano Science and Technology of Soochow University in China.

Adrian Hunt was another team member who left his mark. After years working in industry, Hunt approached Moewes about a project to return to his studies. He ended up studying a single-atom-thick carbon crystal injected with oxide groups in order to understand how it degrades and how it might be used in solar cells.

"Solar cell research is pretty break-neck," said Hunt, referring to the pace. It is something of a marker for Moewes and the Beamteam, all of whom work on projects at the cutting edge of materials.

"We did not win the award but it was good to be nominated … If you're nominated for the Nobel Prize it's still a great honour, and this was only his first paper," said Moewes.

Now working as a post-graduate researcher at North Carolina State University, Hunt chose to complete his doctoral studies under Moewes in part because of the older researcher's iconoclasm.

"In my time in physics, I've found that among the older scientists I know, the ones that do the best are the ones that need to do it on their own," said Hunt. "It's almost like Alex has a compulsion not to do things according to the status quo. He's got to go his own way, he's got to do his own thing, according to his own principles."

The ethos of following one's own principles carries over to the work Moewes offers his students.

"With Alex, there are always research projects for you to do. He is always very accessible but he's also very hands off. It's sink or swim," said Teak Boyko, who finished his PhD alongside Hunt and McLeod this year.

During his grad studies, Boyko had used the CLS's soft X-ray beamlines to uncover the fundamental electronic and mechanical structures of material hardness.

"Shortly before I started my research, materials with hardnesses that had never been seen before had begun to be discovered," he said. "In terms of everyday life, transitioning the parts of an automobile, for example, to harder materials would reduce the wear and tear on them, making for longer lifetimes."

Boyko now works at the CLS as a science associate, where he is working on updating soft X-ray beamlines to include a micro focusing system. It will reduce the already-tiny beam spot by a third, allowing researchers to zero in on the smallest of irregularities in advanced materials.

Another 2013 Beamteam alum, David Muir, has also moved on to work at the synchrotron where he did his graduate research. Muir's work focused on commissioning of the REIXS spectrometer and endstation. His expertise in the mechanics of the beamline has made him an invaluable resource for the CLS in his new role as a science associate for the saline he improved over the course of his graduate studies.

The final of 2013's Beamteam graduates is Robert Green. Now a post-doctoral research fellow at the Quantum Matter Institute at the University of British Columbia, Green's last publication focused exclusively on magnetic atoms within semiconductors with potential applications in computing devices.

"We were looking at concentrations of magnetic atoms of about one per cent in materials that were a few millimetres thick. The beauty of synchrotron imaging is that you can tune your energies so you're specifically studying the one per cent of atoms you're interested in," Green explained.

True to Beamteam form, Green had more to contribute than average graduate student. In addition to his thesis project, he helped design and construct the inelastic scattering endstation at the REIXS beamline.

The depth of talent within this group is truly a rarity for a single research group. Moewes has another six students under his graduate supervision now, heralding yet another generation of ground breaking young materials scientists.