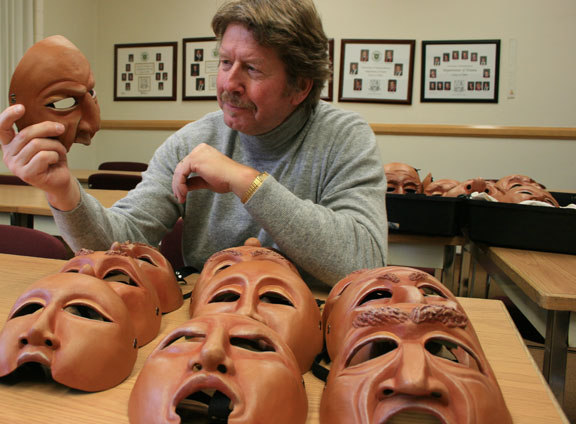 "It's a wonderful way to teach the playing of character," explained Prof. Dwayne Brenna, who has taken this method of teaching character development to other parts of the world.

"Mask acting travels well because it's a physical medium. Once you put the mask on, you adjust your body to it and it doesn't really rely on spoken word. I don't speak Spanish and I don't speak Hindi. You would think I might have trouble in Boruca (Costa Rica) or Hyderabad (India) communicating, but, in fact, these masks do the communicating for you."

At the U of S, 12 students are enrolled in Drama 318 that includes a month-long mask-acting module. The students start with studying and wearing a neutral mask, one that is plain, smooth and symmetrical. On a person, the neutral mask challenges the actor to remove all of his or her idiosyncrasies, said Brenna.

"If you can start from that sense of neutrality, you don't have to make a lot of big changes in your body or even in your voice to create a character. Sometimes it's just a matter of lifting one shoulder up one inch and then you've got a character."

Once the actors come to an understanding of neutral, Brenna has them begin to use masks with significant facial features to learn how to develop characters that would be suited to the mask. It is a departure from the traditional Stanislavski approach to acting that emphasizes working out the inner emotions of a character.

In his office in the John Mitchell Building, Brenna opens a suitcase and starts pulling out masks. While all are a rich medium brown colour and stop below the nose to expose the mouth and the jaw, the similarities end there. Each is distinct. Some have heavy eyebrows. Others are deeply wrinkled. Brenna lifts out one that has few lines and no eyebrows.

"The lines of this mask don't suggest a roundness. It has no wrinkles. It has a bit of a lip that causes you to pucker up a little. It has drooping eyelids that might suggest a sleepy character. The character often seems to be more youthful than some of the other masks. On the particular actress who last wore it, this mask became very young, very flirtatious.  She was very interested in boys."

No two people wear a mask in the same way, he said. And while Brenna hasn't noticed significant differences in how Canadians interpret the masks compared with people from India or Costa Rica, the characters themselves were very much a reflection of culture.

"I've never seen anyone in Canada wear this one and take on the character of a swami," indicating a particular mask with large, round cheeks. "But in Hyderabad, the actor who put it on created a character that had a spiritual quality, but he was also very flatulent. He was always having gas and waving it away from himself,"  said Brenna laughing as he recalled his trip last winter to the University of Hyderabad in India, where he led a two-week workshop on mask and the actor.

Brenna sees benefits to students from other disciplines learning to use masks as a way of improving non-verbal communication, including body language. When someone is wearing a mask, posture is much more noticeable because the focus moves from the face to the rest of the body.

Where his masks will take him next Brenna is not sure, but the suitcase is packed and ready to go whether the destination is around the world or to a neighbouring college at the U of S.