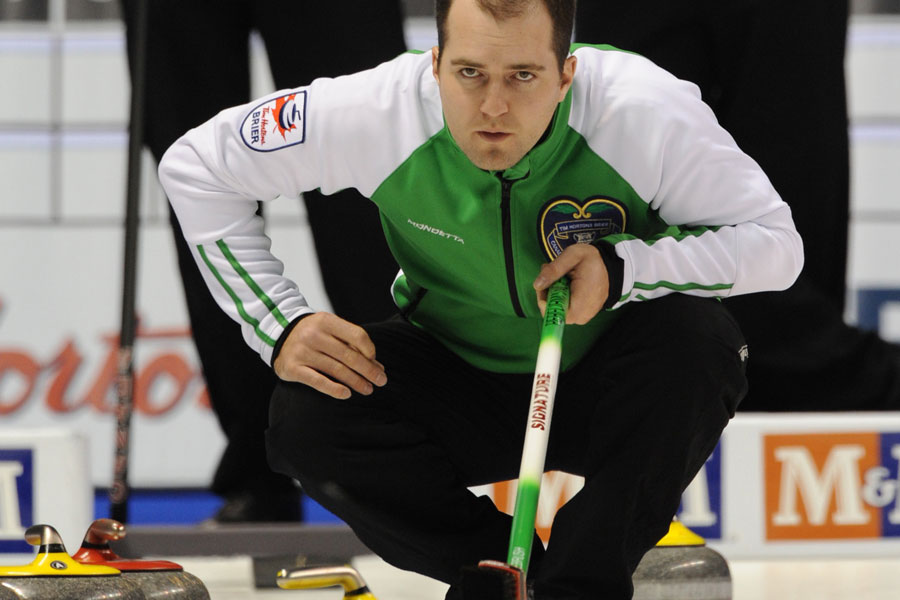 Laycock beat defending provincial champion Brock Virtue Feb. 2 in Shaunavon to earn the right to represent Saskatchewan at the highest level of curling in Canada, the Tim Hortons Brier which will be held March 1-9 in Kamloops, B.C. For Laycock, it will be his fourth attempt at the national title, having curled on Saskatchewan's Brier team in 2007, 2008 and again in 2011.  Shortly before heading to Kamloops, Laycock shared his thoughts on his history in the sport of curling, on what keeps him returning to the ice and on the perfect ending to the 2014 Brier.

On learning to curl

I started curling when I was in Grade 4 with my mom, dad and my brother in a family league in Saltcoats. I remember that I'd throw my two rocks and go back inside to play because it was cold out there on the ice. Then I'd come back out, throw my two rocks and go back inside. I was lead but I moved up to skip pretty quickly, which was good for my learning although my history of sweeping is pretty limited. My interest was really piqued when my older brother made it to the Canada Winter Games final. Even before I went to high school, I was invited to practice with the Yorkton high school team but I was ineligible to play. In high school, I played football and baseball but curling was my passion.

On the appeal of the game

I think what I like most is the combination of skill, strategy and mental toughness that it takes. You can actually achieve victories by out thinking your opponent. You need to always remain calm but you also have to be strategic.

On putting together a team

What I look for in teammates is really work ethic. Talent only gets you so far; you need people who can reach their potential, not just have potential. On the team we have now, I actually raise the average age quite a bit and I'm only 31. The others are 22, 23 and 26 and we really have a bit of a family feel because two are bothers (Kirk and Dallan Muryes) and their dad's our coach. (The fourth member of the team is Colton Flasch.) You also need people who can balance their personal and professional lives. Curling is kind of tough—you're able to win a bit of money and have some sponsorships but it's not enough that any of us could consider quitting our full-time jobs. Then, as a team, you have to have enough fun and success that people want to stick with it.

On curling at a world level

In 2003 we won the World Junior Curling Championship in Switzerland. It was a lot of pressure but actually, I found the provincials tougher. I'd spent my whole career up to that point trying to win provincials as a junior so when we actually made it to worlds, the expectation part wasn't there and we just went out and performed. (Laycock also represented the U of S at the 2007 Winter Universiade in Italy)

On the athletics of curling

I think people could potentially have said curlers weren't athletes before curling was admitted into the Olympics. There is still an old guard out there, guys who are in their 50s, but an 11-game round robin takes physical endurance and you have to be in good shape.

On training to curl

We all have individual trainers and a team trainer. When I'm training I work on legs, cardio, core strength and balance but I also do yoga, which is really about preventing injury and maintaining flexibility. The breathing you learn in yoga is also helpful for handling pressure.

On curling and work

We do about 20 events a year and maybe three are in Saskatchewan so there's a lot of flying and driving. I do some work on the road and make up for days away from the office at other times of the year. Almost all of my holidays go toward curling; I've taken some extra-long weekends in the summer but I haven't had a chance to take an extended summer holiday since I started working at the university in 2007.

On the most memorable rock

It was the final stone of the world juniors against Sweden. It was just an in-turn take out in extra ends and all I had to do was hit and stick. It was not the most exciting rock but I think it was the most rewarding.

On coaches and sport psychologists

Our coach is great at helping with organizing schedules and team meetings. It's important that we're all on the same page about rock selection, ice conditions, our game plan. Our sport psychologist focuses on our on-ice communication and team dynamic. No one player can know everything going on out there so we really need to work as a collective and that's where communication on the ice is so important.

We've seen the draw and we'll play a couple of teams that wouldn't be labeled favourites early on in the week so I think we have the opportunity to get off to a good start. That's particularly good for the younger members of the team as they get used to the pressure of a national competition.

We don't have a different plan for each team we play. We have our primary game plan and then we consider what we know about the other teams, how they're probably going to approach the game and how that's going to impact our plan.

On the perfect ending to the Brier I think playing Alberta in the final would be interesting. One of my former teammates is playing third for Alberta so that would be a lot of fun, and it would be an entertaining game for the fans.

On wearing a microphone during national broadcasts

We're all mic'd at the Brier and you get used to it. Usually I totally forget I'm wearing it. And I don't think I've inadvertently said anything I regret, not loudly anyway.

On fans in the stands

My wife will be there but not my son—a two-year-old just wouldn't make it through the week in the stands and then my wife wouldn't get the chance to see us play. My mom and dad will be there, my aunt and uncle and maybe one of my brothers—he's working on it. And of course anyone else who wants to cheer on Saskatchewan.