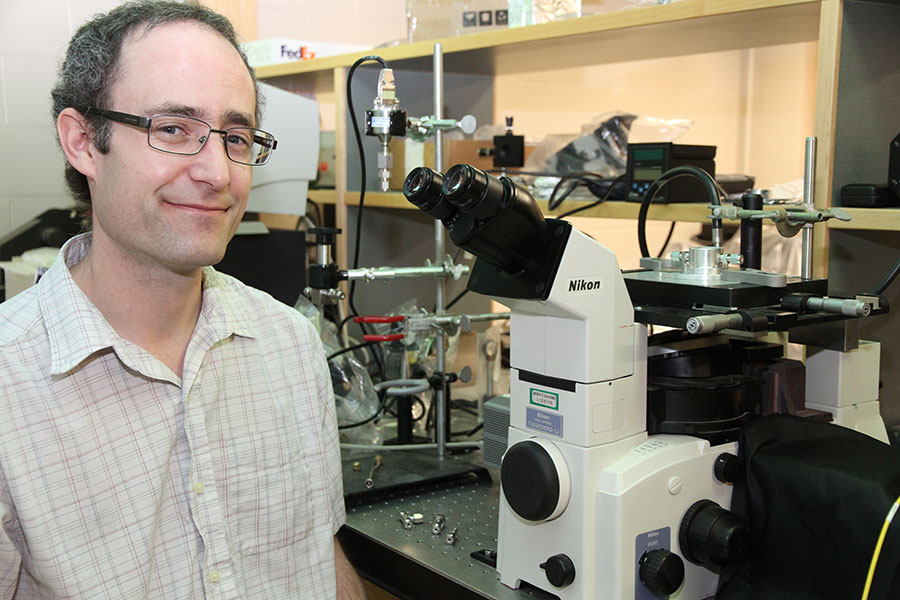 After completing his PhD in chemistry at the University of Toronto, Paige took a post-doc position at Stanford University, in the lab of William E. Moerner. There, he worked on single-molecule microscopy, "an exciting area to get into and Moerner was a leader in the field."

In fact, Moerner is still a leader in the field—on Oct. 8, the Royal Swedish Academy of Sciences awarded him and two others the Nobel Prize in Chemistry for 2014 "for the development of super-resolved fluorescence microscopy."

Moerner was an almost daily presence in the lab, said Paige, who was at Stanford from 2000-2002, just prior to taking a position at the U of S. "And even at that time, people were already starting to talk about the Nobel Prize for him."

The significance of Moerner's work, said Paige, is that it allows scientists to observe the world at the molecular level. As an example, he described working with a particle that emits light. A solution of the particles looks white "but the question is whether it's really white or a combination of red, green and blue." Using single-molecule microscopy and examining individual molecules revealed the light is in fact white.

"Super-resolution microscopy really gives us a lot more insight into how things work. We're able to do new measurements we've never done before," and that brings new insights and new knowledge.

The technology is particularly well suited to biological applications—the study of disease or tissue, for example, said Paige. "That's really where the big push is these days, and it's providing information at a level that's not been available before."

But there are also applications in physics and chemistry; "the Nobel is a nice illustration of how the lines between disciplines is becoming blurred," said Paige. The technology is so applicable to Paige's work at the U of S that he built his own single-molecule florescence microscope for his lab although, in a big breakthrough in the field, the technology is now commercially available.

"You can now get all the benefits of super-resolution microscopy right off the shelf," he said, and for only about $1 million. P

aige sent a note of congratulations to his post-doc supervisor when the Nobel was announced, and said Moerner replied that he was beyond thrilled at the recognition. Asked what he felt his own contribution was to Moerner's Nobel, Paige laughed and replied, "very small; a few molecules."