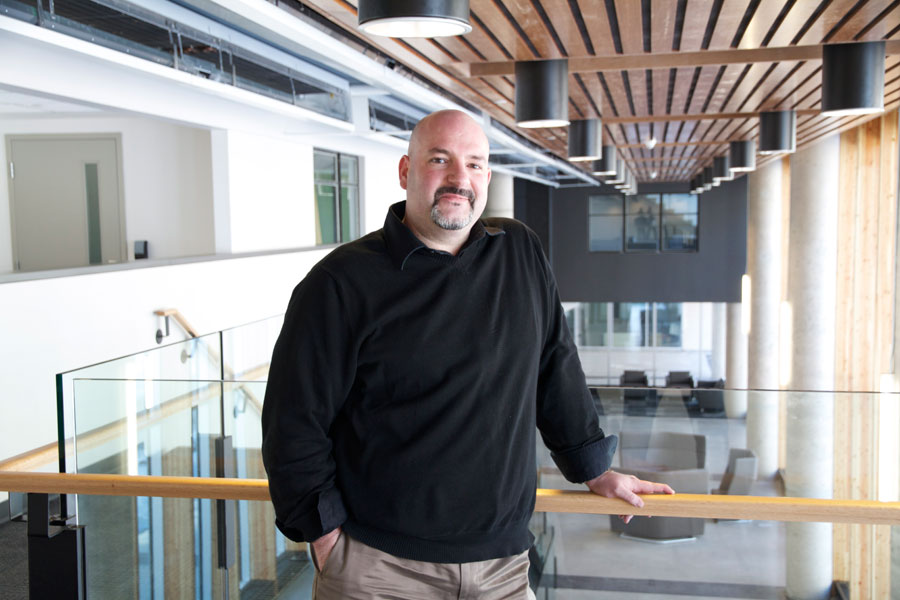 "I wouldn't want to use the word ‘bribe,' but my wife is a trained pastry chef," enthuses faculty-in-residence Martin Gaal.

"I offer goodies and a classroom for people to come and work on their research. If they want me to read their stuff, I can give them some feedback."

Gaal's mandate as faculty in residence is to enhance the academic atmosphere of Graduate House. He and his wife, Deanna, along with their newborn daughter, live in the University of Saskatchewan's newest residence building, which is part of the College Quarter development.

Gaal, who has a PhD in politics and international relations from University of Kent, is also a sessional lecturer in the Department of Political Studies. Originally from British Columbia, Gaal worked and studied in South Korea, China, Taiwan and Belgium before moving to Saskatoon three years ago.

When the opportunity came to live in residence, he jumped at the chance.

"I've always been really involved in student initiatives," he said.

"Grad students can be very insular because they are so focused and there is a lot of pressure to get stuff done. Because of that, there is an unfortunate tendency to shut out the world and start hyper-focusing on what they are doing," Gall said.

This can be counter productive, resulting in struggles academically and personally.  It's important to draw students out of their suites and encourage them to build into
the Graduate House commu-nity, he said.  Social gatherings have included potlucks, games nights and watching early morning Olympic hockey games. As the year progresses, Gaal is seeing students interacting more and more.

"Having the grad students all in one place gives them the space to meet people who are like minded. Even if you are studying something different, you are still in the same place in life."

Gaal has built strong connections with the international students who call Grad House home. Because Saskatchewan students often return to their home towns on weekends, Gaal has the opportunity to be with students from around the world during their off hours.

But he isn't just a social convener. During his Saturday morning "office hours" in the lounge, he often acts as a sounding board for students. He challenges them to take the "Aunt Bessie" test: explain their research to him in less than five minutes in a way that he can understand even if it's not in his field of study. When students can do that, they are ready to defend their work, he said.

Gaal also organizes speakers to come to Graduate House. Anything "quirky" is how he describes the kinds of topics he offers the students – street art and robots are two examples – and he encourages others on campus to contact him with suggested talks.