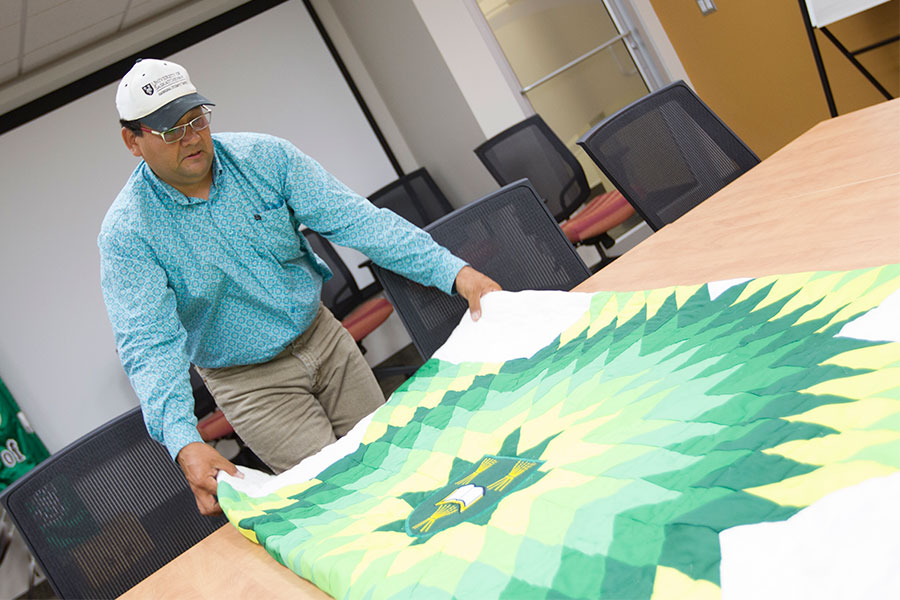 Badger, hired three years ago, is the university's first cultural co-ordinator. It isn't just a job for Badger; it's more about embracing his heritage and sharing that with students as well as faculty and staff.

"I was raised to know these things."

He recounts his childhood filled with weeklong adventures in the woods with his great-grandparents, hunting, fishing, gathering berries. And always in his native language Saulteaux. He learned English when he began to attend school.

Badger is saddened that so many First Nations university students weren't raised in a culture-rich environment. He aims to make up for that by helping them connect with their elders and languages, their ceremonies and symbols. The timing is right.

"Right now, we are in this time of revival almost. Our First Nations people are gravitating back to a holistic, traditional, cultural way of knowing and being who they are because it's been taken away from them for so long."

Providing a positive and safe environment for First Nations students to make connections and socialize is important for Badger who helps organize social gathering like round dances and powwows.

He's busy off-campus, too, working with schools and community organizations that support First Nations people in Saskatoon and throughout the province.

"I want to make the transition smoother for students coming from their communities to the university," said Badger, who attended the University of Regina as a mature student, graduating with a degree in traditional fine arts.

"We have something to offer. We have this land-based knowledge and traditional knowledge. I want others to know who we are by providing staff and faculty and students (with) the opportunity to learn about First Nations culture."

As he continues to work at building bridges, Badger hopes the result will be mutual understanding and respect among people on campus and throughout the province.