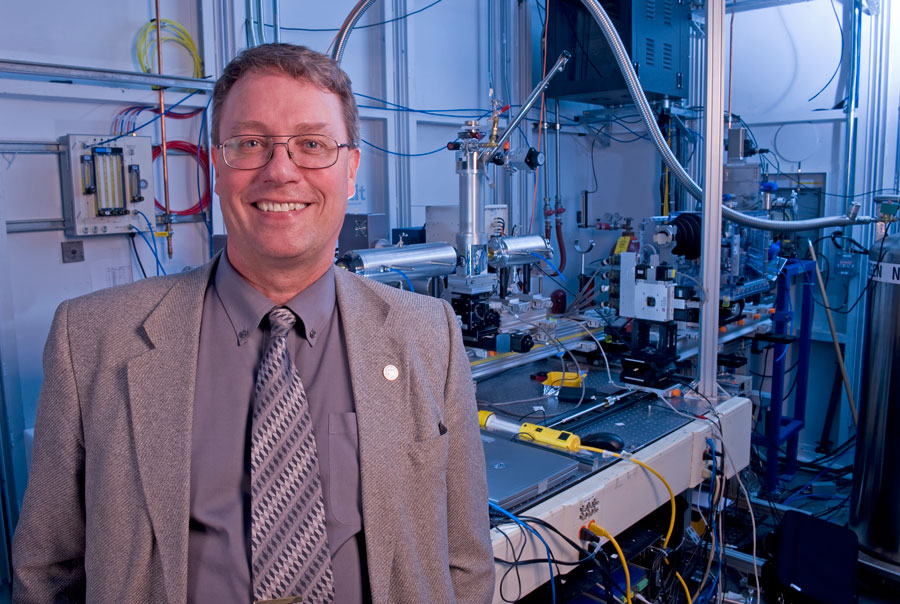 George was 14 years old – a poor student, ranked 30th in a class of 31 at his boys' school in England. A lesson on electromagnetism from his science teacher – "Mr. William Blood," he recalls to this day – changed everything. Experiments with windings of wire showed the students how electricity could create magnetic fields or generate enough heat to melt lead.

Suddenly, the student scraping by at the bottom of the class aced a test, a feat that got him called to the headmaster's office on suspicion of cheating.

"I hadn't cheated; I, for the first time, had actually listened," said George, now a professor in the U of S Department of Geological Sciences. "I didn't try, didn't study – at least, I wasn't conscious of working – but now I was coming out on top."

Anything connected with science came along for the ride. Math could be applied to science and so was suddenly fascinating; he learned calculus at 14. His bedroom doubled as a physics and chemistry lab that became considerably better equipped than his high school lab by the time he graduated.

Science also united George and a group of like-minded boys to form a lunch hour physics club, working on such projects as a Van Der Graaf generator. The column-and-ball spark-throwing apparatus, familiar from classic science fiction movies and at science centres, also has had practical applications in physics research.

"This used to make lovely big sparks a couple of feet long, and it packed quite a punch," George said. "Guessing where the arc would form was lively entertainment."

Funds for experiments were limited at home and at school, which demanded ingenuity. For example, the physics club had an induction coil salvaged from the ignition system of a large truck. It was a useful resource, both for legitimate experiments and not-so-legitimate activities, such as electrifying the physics lab's brass doorknob to shock unsuspecting classmates.

"After a short wait someone tried the door and we heard a loud cry, but the voice was too deep to be one of the boys," George said. "Unfortunately for the physics club, the physics master had decided to check on activities in the laboratory."

Although the culprits left the doorknob electrified so they could make good their escape out the back way, it wasn't hard to figure out their identity. While they escaped serious punishment, the physics club lost their induction coil and never met again.

George's activities in his home lab, however, continued.

He combined a transformer, rheostat and rectifier to safely power experiments on electromagnetism, and built a crude but functional spectrophotometer, an instrument used to study how materials absorb light at different wavelengths.

"I wanted to understand how things absorb light, which is basically what I'm doing now (at the Canadian Light Source synchrotron) with X-rays," he explained. George holds the Canada Research Chair in X-ray Absorption Spectroscopy and is principal investigator on the $20-million BioXAS beamline (Life Science Beamline for X-ray Absorption Spectroscopy).

Adventures in chemistry turned the bedroom wallpaper several shades darker. Inquiries in biology happened in two pools dug in the back yard, and interesting creatures such as stick insects found a home in an old television set converted into a vivarium. Somehow, the largest specimens often found their way onto a sister's towel in the bathroom.

"This elicited lots of screaming, finger pointing and blaming," said George, who protested his innocence if for no other reason that he would not have risked harm to one of his prized specimens. "I now think it must have been one of my siblings."

George's interests in light, biology and chemistry remain at the core of his professional life, where he uses synchrotron tools to study the role of metals in biological systems. This includes functional roles such as in proteins or enzymes, or toxic roles, as in the case of mercury, selenium, and arsenic.

George's work has contributed to the understanding of metalloenzyme diseases (such as Wilson disease, a disorder of copper metabolism) and metals in the environment. One notable project, with collaborators around the world, is examining the toxic effects of naturally occurring arsenic that is poisoning tens of millions of people in Bangladesh. Other projects include studies of plants being considered for phytoremediation, understanding the chemical form of mercury found in fish, and a broad-based research program that examines the metal deposition in numerous of living creatures, ranging from fish embryos to humans.

A much-sought-after speaker, George has been invited to give dozens of lectures around the world, and his 250-plus research papers have been cited close to 10,000 times. The spark lit by a science teacher years ago still burns bright.

"It was all driven by the fun of finding things out and playing with things," George said. "All of my tinkering as a child was focused on discovery. It was always about the science."