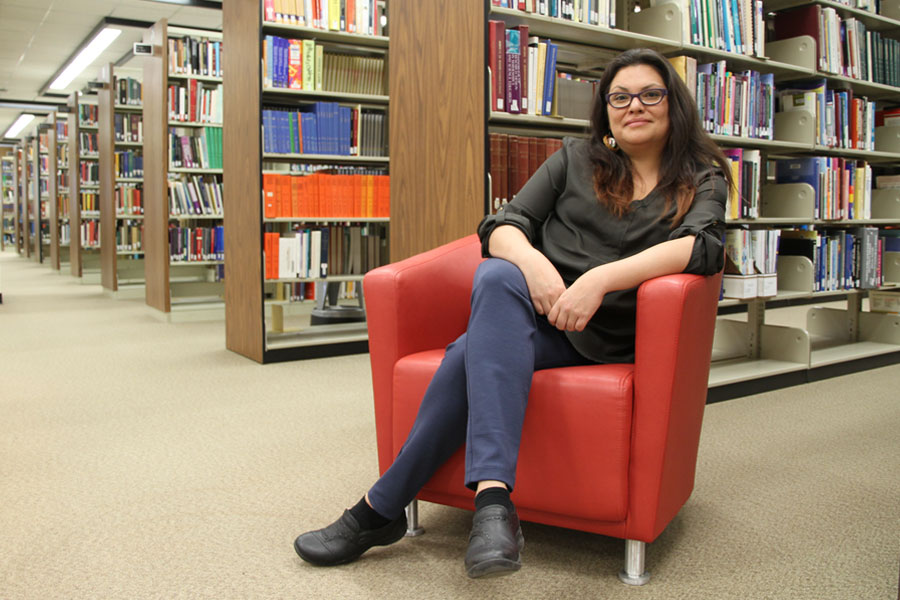 "I want to preserve Aboriginal identity and culture in a fast-paced information world," said Jessica Generoux. "My passion is keeping the culture alive and making sure that our values and our teachings and our systems of knowledge are integrated as an equal with other systems of knowledge."

As the library intern, Generoux is enrolled in the online Master in Information and Library Science degree program at the University of Buffalo, Graduate School of Education. The U of S is paying the tuition for the three-year program. Generoux is also working in a part-time salaried position within the U of S library system.

Establishing a library internship specifically for an Aboriginal person fits with Promise and Potential , the university's third integrated plan. The library is striving to engage Aboriginal people through its collections, facilities, services and workforce. Of the 140 people working at the seven branches of the University Library, only a couple of employees have self-identified as Aboriginal, said Vicki Williamson, dean of the University Library.

"A significant component of our student and user population self-identify as Aboriginal learners. We have been very mindful and respectful of that. We've done a number of things in-house to train our staff, but we felt that an additional commitment to having our workforce be more representative of the population at-large was an important contribution to make," said Williamson.

The U of S library is not unlike other libraries across Canada, and Williamson is aware of only a handful of Aboriginal people working as librarians. The U of S is the first university in Canada to establish an Aboriginal internship in its library. Over the next three years, Generoux will make stops at each U of S library branch, allowing her to apply what she is learning in a supportive environment.

"We've got lots of potential mentors for her," said Williamson. But the internship won't just benefit Generoux. Williamson expects she will be a role model, encouraging other Aboriginal students to consider a career as a librarian.

"Her presence on the floor, delivering services, will make our libraries more friendly and more welcoming. Increasing the number of Aboriginal employees will also serve as a stronger reminder about the need for us to remember that we are all treaty people and to remember the need for cultural sensitivity around the resources that we handle," explained Williamson.

Generoux is no stranger to libraries. A member of Sturgeon Lake First Nation, she remembers her first encounter with books at the library in Prince Albert when she was in Grade 2.

"I found a cozy little spot by myself and I read this scary story. It opened my mind to the world. I checked out more and more books. I found my special place," said Generoux.

"That's what I always have on my mind," said Generoux, whose daughter has just started kindergarten.

She makes a direct connection between improved literacy and an improved quality of life, with libraries and librarians playing a significant role. "Libraries are a great place for networking," Generoux said.

After high school, Generoux earned a Bachelor of Arts in geography from the First Nations University of Canada. She worked at Regina Public Library for about seven years, where as a library assistant, she established and co-ordinated Aboriginal-based programming.