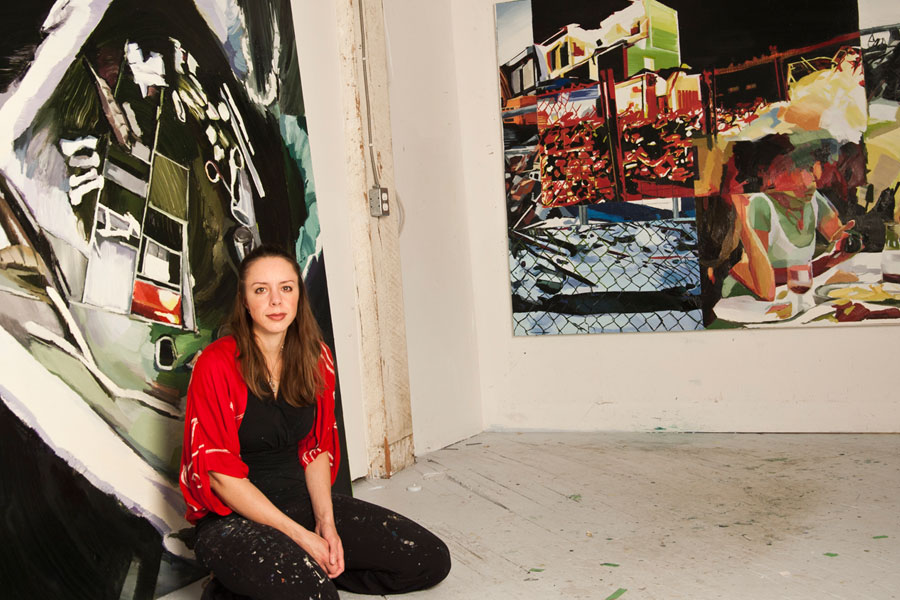 The two works by the assistant professor in the Department of Art and Art History are on display at the University of St. Gallen in Switzerland, part of a unique exhibition designed to profile visual artists who are not currently represented by an art dealer or gallery. As one of just five international artists selected from about 700 applicants for this year's Art@Tell program (named for the university building in Tellstrasse 2 in St. Gallen), Glenn is understandably "totally thrilled and completely honoured."

The two large pieces – 78 inches and 84 inches high respectively – are mounted in a hallway in the building unframed and will remain on display until February. Art@Tell paid for Glenn to travel to Switzerland to oversee the installation and attend the opening Sept. 10.

The works in Glenn's Catalyst series investigate a very personal story with far-reaching implications. Glenn said shortly after she and her partner moved into their first house, oil was discovered seeping into the basement from an old buried tank. The resulting remediation forced them out for almost a year.

During that time, Glenn said she saw two paintings by another artist that inspired her. "One was of a house teetering on the edge of cliff and the other was pointing to an unnamed contagion. When I saw them I thought, ‘Oh my gosh. I'm living that.'" The result was Catalyst. \When the two paintings are returned from Switzerland, the Catalyst series is scheduled to be exhibited in British Columbia, Alberta, Ontario and the U.S. through mid-2016.

The Cave (1) by Allyson Glenn is one of two of her pieces selected for Art@Tell.