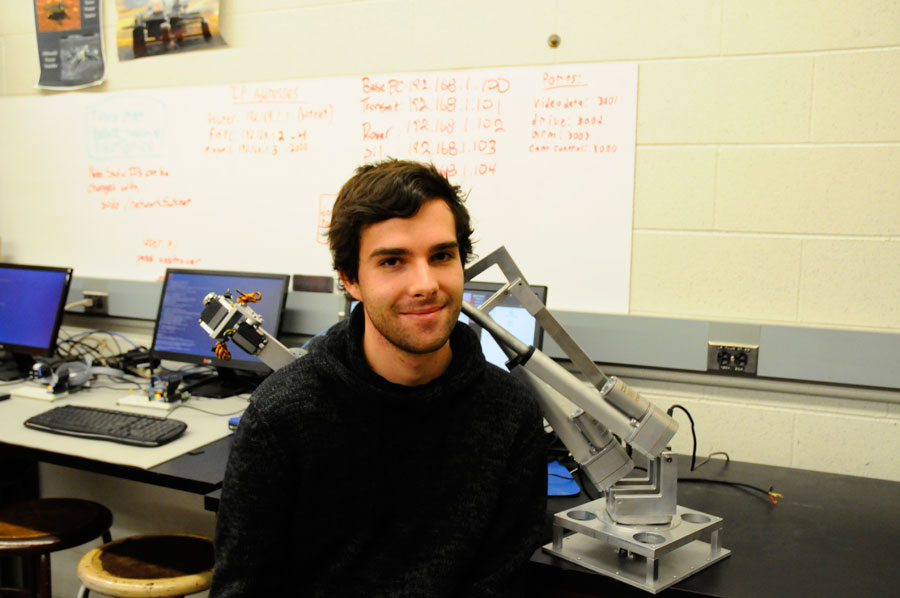 The team is competing in the University Rover Challenge, organized by the Mars Society at its Mars Desert Research Station near Hanksville, Utah. They join 30 other teams from six countries across four continents, a record level of participation for the challenge, which is in its seventh year. The team officially registered in the competition in November, but has been working on their rover design since mid-September.

The USST must design their rover to successfully traverse challenging, Mars-like terrain, provide astronaut assistance, perform equipment maintenance and collect and analyze samples. The Utah event includes four sub-category challenges to test each of these capabilities. As USST Vice-President Operations Ryan Chester explained, in each of the challenges the team will be marked out of 100, and must deliver a presentation worth 100 points, for a total score out of 500.

USST members have been working—tucked away in the back of the Hardy Lab in the Engineering Building—to create both a computer and three-dimensional model as part of the overall development process. As well, they have completed much of the software and electrical system for the rover they will take to Utah. They are focused now on completing the mechanical systems, including the robotic arm, chassis and suspension, and must be ready to create a video of the functioning rover by April 25. This must be submitted in advance as part of the competition requirements. The video helps ensure teams are in a position to compete successfully prior to making the trip to Utah.

With the competition in May fast approaching, the level of excitement among the team is rising. For Gerein and Chester, what they are most looking forward to is seeing the finished product.

"This is the first time building a complete system for the team in four years. The last one was the battery-powered climber the team took to the space elevator competition in Japan," Gerein explained.

"We're also really excited to be getting back to a competition," Chester added.

While the majority of the 30 USST students hail from the College of Engineering, team members come from many quarters of campus including the Edwards School of Business, computer science and biology. This mix generates a broad range of knowledge and perspectives across the team membership.

"We're a pretty diverse group," said Chester. This comes in handy given the range of requirements in design and function needed in this particular competition. Adding to that challenge is the strict requirement that the rover not exceed 50 kilograms in mass.

Formed in 2005, the USST is dedicated to developing new space technology by working on projects and participating in competitions related to the space industry. The group's activities over the years have led to achievements that include third place among 12 teams at a Canadian satellite design challenge in 2012, and three consecutive first-place finishes, from 2005-07, at the space elevator games.

Kate Blau is the communications officer for the College of Engineering.