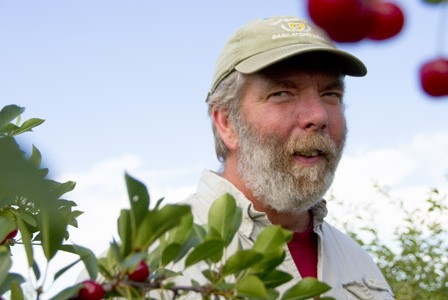 For years, Bors has helped develop tasty varieties of apples and sour cherries that are now being grown around the province. But his name is changing, and even Bors himself jokes about his new moniker, Mr. Haskap.

The haskap is the Japanese name for the fruit also known as a blue honeysuckle. It is a berry similar to a blueberry or Saskatoon berry, but with "something a little bit special," he describes. With a bright blue colour and a flavour that pops in your mouth with sweetness and a bit of tartness, haskaps are inevitably going to be revered by local fruit growers.

After years of breeding varieties of haskap bushes for the prairie climate by trial and error, some are yielding tremendous fruit, says Bors. With parent plants from Russia and Japan, Bors planted the first varieties at the U of S in 1997 and has worked on perfecting the berry ever since.

Some of the varieties taste like a combination of a raspberry and a blueberry, while others taste like tonic.

"Do you know why these Russian varieties taste like tonic?" asks Bors. "They developed this particular plant to mix with vodka‚ a vodka tonic haskap."

Bors points out one of his better-tasting varieties, the borealis, is now being sold at commercial greenhouses around the province. The borealis hides its fruit underneath the leaves, so birds and bugs don't have the opportunity to eat the fruit before it can be harvested.

He is also working on a new variety called a honey bee, a plant that yields little fruit but blossoms with tremendous flowers to pollinate the other haskap plants.

Bors points out native haskap plants also grow happily in the wilds of northern Saskatchewan, but produce very small fruits. So, on a sabbatical two years ago, Bors traveled across Canada collecting some 1,200 different plants from nine different provinces (with B.C. the lone exception) to cross with Russian and Japanese varieties in the search for the perfect combination of heartiness and high yield.

It was a very exciting year," says Bors. "I've got the best job in the world."

Bors is happy with the haskaps he has helped develop and he hopes others will plant the bushes for their own enjoyment. But now his attention is shifting to a new species of plant, the filbert or hazelnut. Adapting the filbert to the Canadian prairies will be a challenge, he says, but he and his colleagues at the Fruit Breeding Program are confident that they will have the same success with filberts that they have had with apples, cherries and haskaps.

"Soon, they're gonna be calling me Mr. Hazelnut."

For more information on the U of S Fruit Breeding Program visit
fruit.usask.ca.