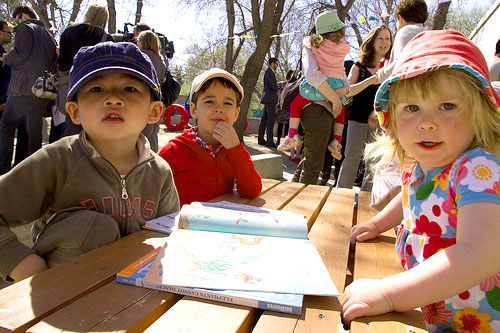 "What we're seeing is something I call ‘Generation Squeeze,'" Kershaw says. "The generation raising young kids today is squeezed for time at home, squeezed for income because of the high cost of housing, and squeezed for services like child care that would help them balance earning a living with raising a family."

Kershaw's research has been supported by the Healthy Children research team at the Saskatchewan Population Health and Evaluation Research Unit (SPHERU), an interdisciplinary team of population health researchers from the Universities of Saskatchewan and Regina, through their early years network, kidSKAN (
www.kidskan.ca).

"The early years have such a dramatic impact on the rest of people's lives," says Nazeem Muhajarine, who leads the Healthy Children initiative and whose team has been working with Kershaw and his colleagues on the report. "As a society, we can either pay now – by better supporting the generation with young children and giving their kids a better start in life – or pay much more later by trying to deal with the effects of today's declining standard of living."

The researchers hope that releasing the study in Saskatchewan, with a provincial election underway and with its history of leadership in health policy, will help bring the issue to the forefront. The Saskatchewan-specific report is available at
www.kidskan.ca/newdeal.

"Canadians in Saskatchewan led the development of our country's greatest social policy achievement – universal access to medical care," Kershaw says. "We now need citizens to show similar policy leadership if we are to ensure Canada once again works for all generations."

Kershaw and a team of researchers at UBC's Human Early Learning Partnership (HELP) have created reports for each province in Canada, comparing the costs of living, household incomes and services available to families today with those during the 1970s.

The research also exposes a troubling trend: while Generation Squeeze struggles to raise young families, retiring Baby Boomers have higher incomes and more wealth as the housing market has nearly doubled over their adult lives.

"The Occupy Wall Street movement and related protests across North America signal a growing concern about inequity between the rich and the rest," Kershaw explains. "Our pan-Canadian study shows we can only address these pressures by tackling the inherent intergenerational tension."

Kershaw and colleague Lynell Anderson found that the average household income for young Canadian couples has flat-lined since the mid-1970s (after adjusting for inflation) even though the share of young women contributing to household incomes today is up 53 per cent. While household incomes have stalled, Generation Squeeze is simultaneously struggling with the costs of living because housing prices increased 76 per cent across the country.

The study shows Canada is among the worst industrialized countries when it comes to adapting to the declining standard of living for young families.

"Canada needs a new policy to restore the standard of living for the generation raising young kids," says Kershaw, who has calculated that the policy changes required would cost $22 billion annually or 2.8 per cent of the growth Canada's economy has seen since 1976.

Kershaw has proposed policy changes, called the New Deal for Families, that include enabling mothers and fathers to stay at home with newborns until they reach at least 18 months of age, providing child care services that cost no more than $10 per day, and allowing employees and employers to use flex-time to better balance time spent at work with time spent at home.

Six provincial and territorial elections were held this October. Kershaw points out that "not one campaign engaged adequately with how Canada has become a country in which it is far harder to raise a young family."