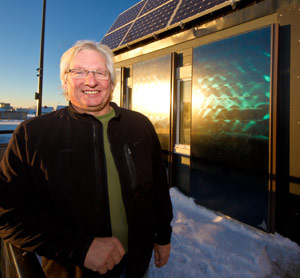 LePage started doing research about how he could build a net zero houseâ€”the kind of place that could exist harmoniously with the surrounding beauty of the area by being essentially energy self-sufficient. The options, he found out, were available. But they were not cheap.

"When I started looking at building a net zero home, it became clear you
could do it... with enough money," he says.

His research lead him to believe that it was the "Jay Leno-types who could actually afford these types of properties, not the general public," estimating that building a new, net zero property that would generate as much energy as it would consume was in the $4-500 per sq. ft. range, and this, he thought, was far too much money.

So, along with some partners, LePage started a new company, VerEco Homes, to build net zero houses for people in Saskatchewanâ€”and do it with drastically reduced costs, around $125-150 per sq. ft.Â Although that amount does not include an estimated $38,000 for the active solar panels that provide the house with hot water and electricity, the savings on utility bills and available grants from the province quickly re-coop that extra cost, LePage points out.

Part of reducing the cost of the home was reducing the total size, and with some seemingly minor adjustments (like reducing the size of walk-in closets and pantries) LePage was able to take a 1,600 sq. ft. home down to about 1,200 sq. ft. without sacrificing any of the livable area.

In the end, a 1,120 sq. ft. home was built in Saskatoon. Eventually, it will be moved out to his property at Sarilia, but until then, the house is part of an educational display at the Western Development Museum (WDM) in Saskatoon.

One might think the highly-insulated 16-inch thick walls would cut into the already modest size, but once inside, the three-bedroom, two-bathroom home feels much bigger than the specifications would indicate. It boasts a remarkable reduction in water and energy waste compared to a normal house, and there is no furnace in lieu of passive and active solar heatingâ€”which LePage points out would save the average homeowner tens of thousands of dollars, over the life of the home, on the cost of heating alone.

LePage said there were three major aspects to consider when trying to reduce the footprint of the net zero house: heating and cooling costs, energy to heat water, and electricity used for lighting, appliances and mechanical. According to LePage, energy consumption from a net zero house is drastically lower than a traditional home in these three areas.

As LePage explains during tours of the house, cutting the heating and cooling is actually quite simple. For starters, there is no air conditioning unit. The overhang of the passive solar design keeps the summer sun out, and the thick insulation helps maintain cooler temperatures. And for heating, the sun does all the heavy lifting through the home's passive and active solar design.

The passive solar works in a number of ways, but the most obvious are the large, south-facing windows that throw sunlight onto thick floors and counter-tops (better known as "thermal mass") when the sun is lower in the horizon. The floors and counters absorb the solar heat throughout the day and release it slowly during the darker parts of the day.

There are two types of active solar panels at work in the house as well, with photovoltaic panels on the roof used to provide electricity and another set attached to the front of the balcony to heat water.Â The photovoltaic panels will produce more electricity in the summer than is needed by the home, so SaskPower acts like a battery by purchasing unused electricity in the summer and selling it back to the consumer during the winter when it is neededâ€”a process known as "grid net metering".

"Normally, you're losing a lot of heat energy down the drain," says LePage, "but this water recovery system makes a lot of sense... if you think about it, you're actually using the hot water from your shower to provide more heat for the shower."

Energy efficient lighting, appliances and mechanical features are used to reduce energy consumption. And the electricity comes directly from the photovoltaic solar panels.

A key tip he got from a mentor was to ensure that anything you add to the house can be used in multiple ways. For example, the roof is angled at about 52 degrees to both capture the ideal amount of sunlight on the solar panels and to keep snow that would hinder collection of solar energy from sticking to the roof. The overhang was also built at 26 inches, so for every inch of rain, the roof captures about 800 gallons of useable water.

Another feature LePage points out is that the house is ready to move (RTM), so it can be built to suit the needs of any property, either rural or urban.

LePage seems like he could go on for days about all of the features of the house, and I was only able to scratch the surface. In addition to the actual infrastructure of the house, LePage and VerEco can help curious house shoppers with applications for green mortgages, rebate options and even custom home design.

Perhaps his favourite aspect of the entire home is just letting people know what is possible, he says, "The educational component is the final stage is this whole process... our goal now is to teach as many people as we can."

Some ideas for the home stem from projects LePage is working on as part of his pursuit of his master's degree at the U of S School of Environment and Sustainability. Construction costs for the home were split between VerEco and WSE Technologies, a Saskatoon-based solar energy company. SaskPower and 24 other partners are picking up the tab for operating costs while the home is on display at the WDM.

Until his display home at the WDM makes its way to his property overlooking the North Saskatchewan River, LePage will be taking visitors through the house as part of an educational component in partnership with SaskPower. So far, about 1,300 people have made their way through the house, and LePage is hoping thousands more take the tour.