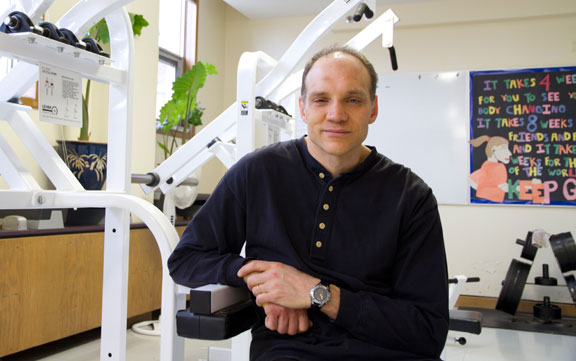 Through various studies with adults over 50 years of age, Phil Chilibeck, a professor in the College of Kinesiology, has been researching the effects of exercise in combination with the nutritional supplement creatine to determine how to best prevent osteoporosis.

"Creatine has been used for about 20 years," explained Chilibeck. "Because it supplies energy to muscle cells, it is typically used by athletes in strength sports to help build muscle mass (but) some studies showed that bone cells also used creatine for energy and bone formation, making them more active. We thought we could determine that effect."

Initially, Chilibeck ran a 10-12 week study that involved men over the age of 60. "We put participants in a weight training program, with half on a placebo and the other half on creatine," he explained. "What we found was that in addition to helping with muscle mass and strength, certain markers in urine samples indicated that those on creatine also had less bone deterioration."

Chilibeck and his team decided to expand the study to include men and women over 50. Participants in this study are taking part in the same exercise program over the course of a year, with half taking creatine and the other half on a placebo.

"Because of the number of osteoporosis-related fractures, this is important research," he said. "A surprising number of people fracture their hips after the age of 50—about one in three women and one in five men will have a fracture related to having osteoporosis. Between surgery and recovery, a fractured hip is quite traumatic, and the associated costs are substantial. While women have a higher incidence rate, men generally do worse in recovery. Some even die from complications; it's a serious problem with older people."

The hypothesis the team hopes to prove is that "while both groups will benefit from exercise in terms of bone geometry, the creatine group will have an added benefit in terms of increased bone density. We definitely know that exercise and weight training are good for the bones, but traditionally have had only small effects on density. We are trying to add a nutritional supplement to see if there is additional effect on bone density, which is a predictor of osteoporosis. Hopefully we will have another weapon against osteoporosis."