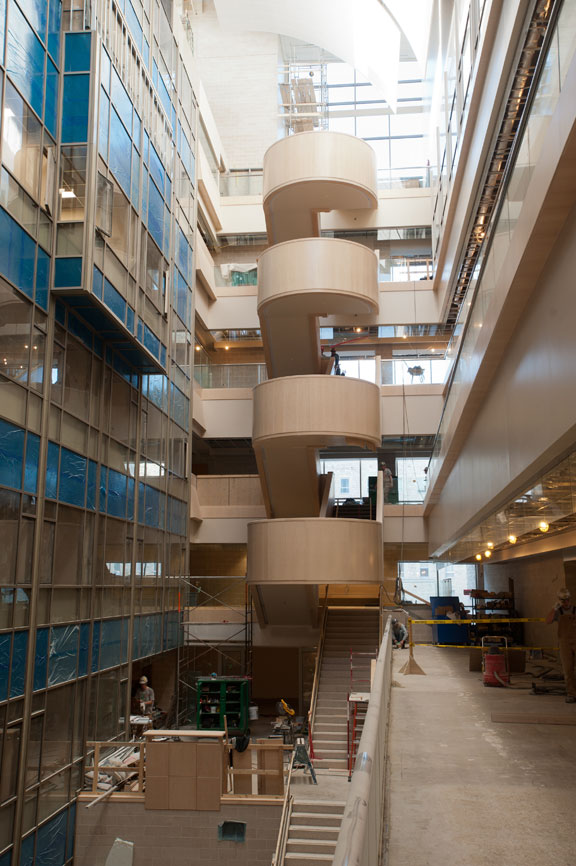 The contractor is taking care of final interior details, testing mechanical systems and balancing the airflow in the Level 2 containment research facility, said Brad Steeves, director of operations for the Council of Health Science Deans (CHSD). At the same time, detailed plans are being drawn up for who is moving what where, and when in advance of an occupation day that could be as soon as eight weeks away.

The process of managing the move-in began long ago, Steeves said, when a working group was set up to develop principles for occupancy and gather data from potential occupants—areas of research, funding, equipment needs, and numbers of graduate students and laboratory staff. Using that information, the building's occupants have been grouped and assigned open, collaborative space in the building.

"We've clustered them by like types of research—cancer, molecular design, neuroscience, drug discovery and others," said Steeves. "The clusters were dynamic for a while as we've tried to get the right people together" and in the end, there are about eight groupings of six to 10 researchers each. When grad students and lab staff are included, "we're talking about 300-400 people on the move."

The groups have toured their assigned spaces and "now we're working on who gets what office, and working with the researchers and lab managers to figure out where their freezers are going, where their fridges are going, those kinds of details. We're trying to pre-plan the move as much as possible and we're developing a move-in schedule but at the last moment, that schedule depends on a lot of things going just right. If anything takes longer than anticipated, it will affect the move-in."

Because D Wing is designed to support what Steeves termed team science, researchers grouped to encourage "more collaboration and hopefully more success," there has been significant adjustment in thinking about wet bench research.

"The big difference is that people are moving from individual labs in the existing Health Sciences building and Thorvaldson to group labs assigned to a number of people in a like research area. There's no doubt this project is, in part, an exercise in change management. It's a radical change but it's the way labs are being designed across North America."

In addition to labs and offices, Steeves said the building has plenty of unassigned space for occupants to use casually. "I know some may question the necessity of the central five-storey atrium and the many open spaces throughout the building but there is more to research than what goes on in the labs. This building is designed to promote collaboration everywhere."

He pointed out that the Health Sciences complex "does not belong to any one college." It will be operated by the CHSD, which will provide lab management and technical staff to handle operations like central stores. "These services will create efficiencies and take some of the management and administration details away from lab technicians and staff who can then concentrate on research."

Turning to the other components of the Health Sciences project, Steeves said E Wing, which will house, among other facilities, the clinical learning resources centre and the health sciences library, is about one year away from occupancy. The expectation it will be completely ready by the start of the fall term in 2013. And schematic design has begun for renovations to the 1948 wing and parts of the 1970 wing of the existing Health Sciences building.