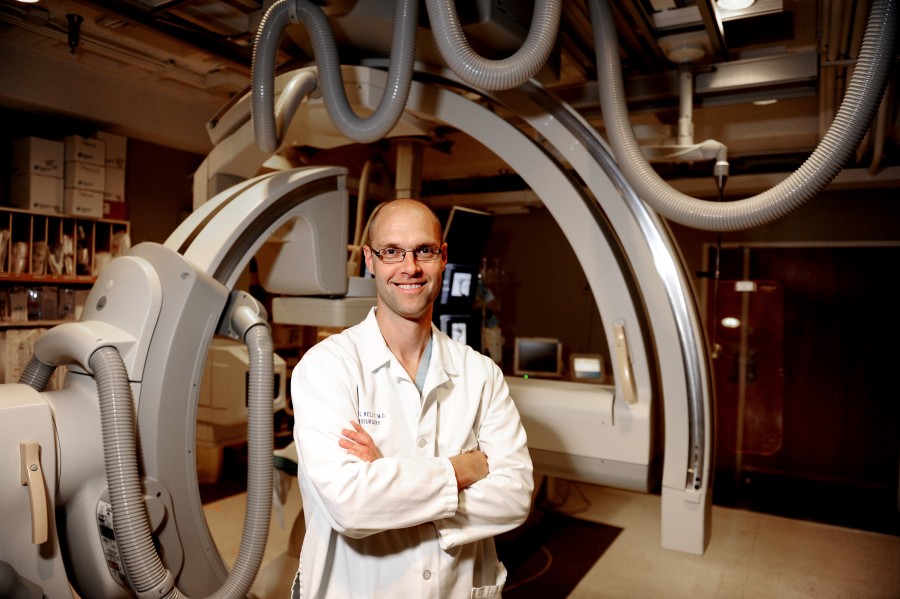 "I see myself as the transformational leader of our team," said Kelly, describing his role as stroke research chair that begins Nov. 1. The position was announced Oct. 9 and will receive $1 million over five years from the Saskatchewan Health Research Foundation and the Heart and Stroke Foundation with additional support from the University of Saskatchewan and the Saskatoon Health Region. "I put the chair in the middle of the triangle, with an overlap between clinical care, basic science and clinical research."

Of those three points of the triangle, it is clinical care that is Kelly's focus, the patient care he and his colleagues bring to the emergency room and the operating room for people who have suffered massive strokes or ruptured brain aneurysms. It is a passion that stems back to his early training in neurosurgery.

Born and raised in Gray, Sask., Kelly earned an undergraduate degree in microbiology in 1995 and a medical degree in 1999, both from the U of S. There followed a six-year neurosurgery residency during which he was troubled by a lack of treatment options for stroke victims in Saskatchewan. "We were often sending patients out of province, those with ruptured aneurysms in particular, to Alberta or Toronto for treatment. I really couldn't grasp why that was the case, why we weren't able to offer treatment here."

Part of the solution was further training for Kelly himself, which included a fellowship in cerebrovascular surgery at Stanford University in California and two years at the Cleveland Clinic in Ohio doing endovascular neurosurgery, a minimally invasive form of brain surgery.

He returned to Saskatoon in 2008, to academic appointments in the Departments of Surgery, Medical Imaging and Anatomy and Cell Biology in the College of Medicine as well as a surgical position with the Saskatoon Health Region. But his main goal was to see a clinical treatment program for people with cerebrovascular disorders—vascular malformations in the brain. The result is the Saskatchewan Cerebrovascular Centre. The centre treats patients from across the province "but in order to have a world-class clinical program, you have to have, I think, more aspects to it, in particular research."

Point two of the triangle is basic science research. Kelly got his start here while still a resident when he began a PhD program in advanced biomedical imaging at the Canadian Light Source. His focus is on tracking neural stem cells injected into the brain, cells that can potentially develop into new tissue at the site of a stroke. "One of the issues with stem cell transplantation is the ability to follow or track these cells," he explained. An important tool he uses is a rapid scanning x-ray florescence synchrotron technique to track cells. Kelly said the results so far have been good but regular use of neural stem cells to treat stroke damage "is the long-term goal."

What may be closer are advances in medical devices like stents—expandable mesh tubes that are placed inside blood vessels. "Our other basic science intent is to use some of the synchrotron techniques to look at how the stents we've implanted are working, and develop new stents, possibly ones that degrade over time. The idea with my chair position," he continued, "is to try to bridge basic science research with clinical application to directly impact patient care."

The third point of the triangle is clinical research. "We're running 15 clinical trials right now and the idea with that is to bring the best technology, the newest technology to people who have these problems."

Most trials are industry funded, Kelly explained, and create revenue. "As a result, we've been able to roll out some investigator-run studies that are purely academic in nature. As chair, I have the opportunity to conduct research that matters."

Considering the three points of the triangle, Kelly said his plan for the $1 million that comes to the chair is "to conduct stroke research that benefits the people of Saskatchewan."

He went on to say he appreciates and relies on many people to keep this stroke care and research effort moving forward because "at any moment, I might have to stand up and walk out of this room because people in my field, patients can die in minutes. In the end, that is what I'm trained to do, so it's imperative that I have a competent team that I can entrust with the research work."

Looking five years down the road to the end of his term as chair, Kelly wants to see the Saskatchewan Cerebrovascular Centre as world class, "treating people from all over the province with these life-threatening conditions, and that all those people are registered in studies that offer them cutting-edge technology. And the goal is to have quite a robust, independently running clinical research and basic science program."

But beyond the clinical and research efforts, Kelly believes he can play a role in simply raising the profile of stroke itself.

"I've noticed all along that stroke is not really a high priority for health regions and governments. When I do public presentations, I always ask the audience how many people know of someone who's had a stroke, and everybody puts up their hand so why don't we care about this?"

Kelly speculates that unlike the crushing chests pain of a heart attack, stroke is a silent disease and killer. "You get a weakness in your arm, it's hard to diagnose and people are afraid to call the ambulance because it costs $600 if one shows up at your house in a small town in Saskatchewan. It's a big problem and stroke needs to achieve more public awareness."