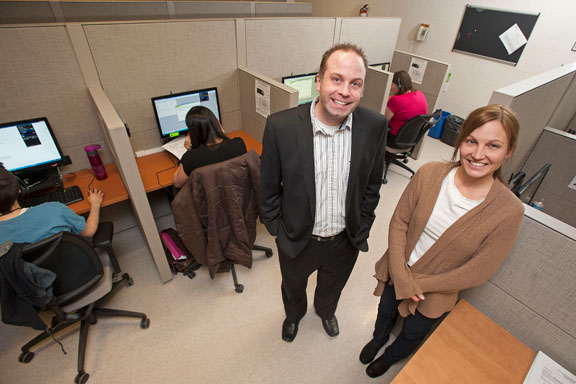 That is the aim, however, of Taking the Pulse of Saskatchewan, an ambitious survey being undertaken by the Social Sciences Research Laboratory's (SSRL) new survey facility.

Undergraduate students hired for the project hit the phones on March 5, conducting telephone surveys of more than 1,000 randomly selected residents across the province to gauge attitudes on several contemporary, and often divisive, topics. The survey is comprised of 42 questions, all of which fall under one of seven themes: sustainable resource development; crime and public safety; Aboriginal issues; the Saskatchewan economy; immigration and diversity; health, wellbeing and Saskatchewan families; and moral issues.

An agreement has been struck with Postmedia News and the CBC, so results of the survey will be unveiled through
The StarPhoenix,
The Leader Post, and CBC Saskatchewan this coming fall.

"This survey is really reflective of the diverse research interests and interdisciplinarity of the social sciences," said Jason Disano, director of the SSRL, noting that Taking the Pulse of Saskatchewan involves researchers from all seven departments within the Division of Social Science in the College of Arts and Science.

"I think you would be hard pressed to find any initiative within the college or university that brings together 31 faculty."

Encouraging interdisciplinary research, increasing community engagement and providing hands-on research opportunities for students are keystones of the SSRL, said Disano, and this survey ties into all three objectives.

To develop the survey questions and methodology, researchers worked in six thematic-based teams. Forty students—37 of them undergraduates—were hired to conduct the survey, and many will be retained over the summer to analyze and disseminate the survey data.

And because Taking the Pulse of Saskatchewan is going to be an annual project for the survey lab, it is expected the project will spur an ongoing, province-wide dialogue, as well as track any long-term shifts in perceptions towards hot-button issues within the province.

"By engaging the media as a partner in this study, we are indirectly engaging with the general public and, more importantly, making the results of this research more broadly available and accessible, building stronger ties to the community," said Disano.

Carolyn Brooks, assistant professor of sociology and leader of the survey's crime and public safety team, stressed that while this project has defined objectives, it is hardly an end in itself.

"Just by bringing together faculty from other departments, we have learned that some of us have similar teaching and research interests. So the interdisciplinary aspect of the project is already breaking down some boundaries," she said.

There is also a likelihood that future versions of the survey will be developed with more input from community groups, said Brooks, and the data generated could possibly inform future policy development.

"A similar survey conducted in 2001 has been used by Saskatchewan Education to help shape curriculum development," she said. "And by tracking shifts in public opinion, that may also inform some of the research being done here on campus so there are many potential pieces to this project as it grows and evolves."

The SSRL consists of five complimentary research laboratories, providing social science researchers and students access to innovative infrastructure and supports. The lab consists of 20 computerized survey stations and a 16-seat focus group room. It was officially opened in late 2011, and made possible by grants from the Canada Foundation for Innovation (CFI) and the Government of Saskatchewan. The College of Arts and Science and Edwards School of Business also provided support.

"The SSRL is a transformative initiative for the social sciences on campus and there is nothing comparable at any other Canadian university," said Harley Dickinson, vice-dean for the Division of Social Sciences in the College of Arts and Science. "Social science researchers from across campus can now implement cutting-edge research programs that address both academic and community-based issues, as evidenced by projects like Taking the Pulse of Saskatchewan."


Kirk Sibbald is communications officer in the College of Arts and Science.