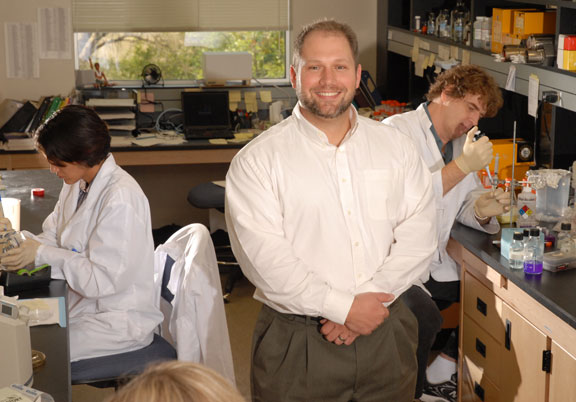 The software is used to analyze kinases â€“ a type of enzyme involved in virtually every cellular function, from energy use and reproduction to modifying gene expression.

"Kinases have a central role in controlling cellular processes and are associated with many diseases,"Â says Napper, an associate professor of biochemistry with the U of S and senior scientist at the Vaccine and Infectious Disease Organization-International Vaccine Centre (VIDO-InterVac). "They're logical points for understanding biology and represent important treatment targets."

"This is a premiere example of what can be achieved through interdisciplinary and collaborative research," says Kusalik, a professor in the computer science department.

The standard lab tool in kinase research is the microarray, which allows researchers to analyze many different kinases within a sample simultaneously. A microarray looks like a standard microscope slide with rows of spots, each spot representing a different molecular test.

"With older methods, it was like having a little flashlight in a cave â€“ you can see, but it doesn't tell you all that is there," Napper says. "These arrays give you the whole picture but you end up with absolutely mountains of data."Â The problem was that the mountains of data were making no sense.

"They knew there were problems with the methodology they were following because the results â€˜weren't working out,' but they didn't have sufficient expertise in bioinformatics to come up with an alternate method," Kusalik says. Â "That's where we came in."Â Kusalik is an expert in bioinformatics, which is the application of computers and information technology to biology and medicine. One well-known application of bioinformatics is DNA sequencing.

For Kusalik, the problem was not the volume of data but how it was being handled. Standard software for analyzing DNA microarrays does not work well with other microarrays. He explains that it is like using a descrambler box from one cable company to try to watch television from another company - there will be fuzzy glimpses of the picture, but it will be impossible to view the entire program with any clarity.Â The solution was to build software tailor-made for kinases.

"By developing a technique specifically designed for kinase microarrays, we are able to get more data, and with more accuracy," Kusalik says.

Licensing of the patented technology is currently underway, and a demonstration of its effectiveness recently appeared in the journalÂ

Science Signalling.
Â Napper says that other research groups have approached them to run their existing data sets through the new software.

"It's very brave of them â€“ it may prove some of their earlier conclusions wrong," he says.Â "We're going to leave it up to other people to decide if they want to re-analyze their data. I bet there's a lot more interesting biology that's going to come out of their studies."

The work at the U of S was supported by the Canadian Institutes of Health Research (CIHR), the Natural Sciences and Engineering Research Council of Canada (NSERC) and the Canada Research Chairs program. Additional funding was provided through Genome Canada and the Alberta Meat and Livestock Agency (ALMA). The Beef Cattle Research Council is also funding further work to apply this technology to various livestock diseases.

For more on this story and research at the U of S, visit the
Research Communications website