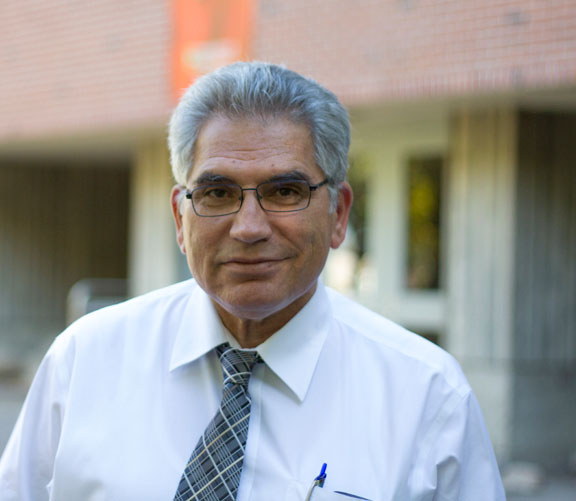 "It's very soon to start making plans," said Kipouros who took up his new role Sept. 1. "I need to listen to everyoneâ€”people in the college, students and alumniâ€”before I make concrete plans."

So his first step, in between all the meetings a new dean is required to attend, is to get to know all faculty and staff in the college.

"I want to speak with everyone here, see labs, ask questions and hear about what they do, what they are proud of," explained Kipouros, who came from Dalhousie University where he held positions that included assistant dean of the Faculty of Engineering, director of the Minerals Engineering Centre, and head of the Department of Mining and Metallurgical Engineering. "I want at least a half hour with everyone to talk; not an evaluation, but the start of a personal relationship."

While his priority right now is getting to know the university, and "everything we do in the college," the new dean also recognizes the importance of reaching out to the student body. But beyond current students, Kipouros also wants the college to build relationships with prospective students.

"Some of my mandate was prescribed before coming here, like increasing enrolment by 30 percent, and that is certainly a priority."

Kipouros believes that by attracting more students from across Canada as well as more Aboriginal and female students, demographics typically underrepresented in engineering, the enrolment targets are achievable, but work needs to be done to encourage these groups to enroll.

"I would like to create a summer camp inviting high school students to the college so that they could see firsthand what engineering is all about," he explained. "Somewhere in the college, I also want to have groups of women and Aboriginal engineers who can act as sort of mentors to prospective women and Aboriginal students, they can talk about their experiences in the field."

Closely connected to students are Kipouros' plans to expand the internship program in the college, an area of strength but one that doesn't receive a lot of attention. "I am going to promote the co-op/internship component of the college to private and public corporations because I believe professional education needs a hands-on experience. I think a lot of students would be surprised to find out about this (program) as well."

"I've seen both sides. I know how to create win-win partnerships for both universities and corporations," said Kipouros, who was a senior research scientist with General Motors (GM) for a number of years after finishing his post-doctoral work at the Massachusetts Institute of Technology (MIT). "After receiving my master's and PhD from the University of Toronto and my post doc, I worked at GM for some time, but I missed academia and decided to return, accepting a position with the Technical University of Nova Scotia which amalgamated with Dalhousie in 1997."

But it was his time with GM down in Michigan and Indiana, not to mention his time at MIT that helped Kipouros realized the importance of being a fundraiser, a realization that has served him well in his academic career. "You have a lot of freedom in academia to explore ideas, but you have to generate the funds you need."

Kipouros also wants to involve alumni more in education in the college. "Alumni can contribute much more to the college. By providing feedback on how their education prepared them for professional life, they can make a real contribution to education here. I want relationships with alumni that are more than social dinners and golfing."

After listing all the things he wants to accomplish, Kipouros admitted there are a lot of challenges ahead.

"It is a big job with a lot of challenges, but also a lot of opportunities. There is so much development going on in Saskatchewan and Saskatoon. Everyone is coming here. Saskatoon is the fastest growing city in Canada, so that tells you just how much opportunity there is.

"But because Saskatoon is developing so much, finding a house to live in might be my biggest challenge right now," he added with a smile.