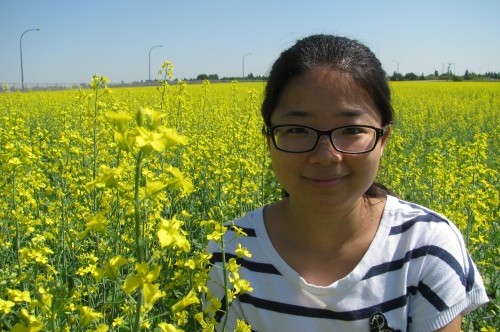 Clubroot is a devastating disease caused by the pathogen Plasmodiophora brassicae and can cause 100 per cent yield loss in highly infested fields. Since 2003, it has spread from 12 to over 1,000 central Alberta canola fields and has been identified in Saskatchewan.

So far, progress fighting clubroot has been limited, mainly because it hides in the soil making it difficult for scientists to study and observe.

The pathogen can't hide any longer. University of Saskatchewan biology PhD student Jiangying Tu has developed a way of culturing a pure sample of the clubroot-causing parasite. Her finding will allow scientists to selectively infect lab plants with clubroot and develop biological tools to fight the disease.

"The lack of cellular and molecular information for this disease has been a major roadblock to clubroot research in Canada," says co-supervisor Peta Bonham-Smith, adding Tu is successfully getting "to the 'root' of the infection and disease progression processes."

What was previously hidden beneath the soil can now be easily observed in a controlled setting without any other infectors such as bacteria or fungi. Tu's method has already enabled her to completely revise the understanding of how clubroot spreads through the canola plant.

"This technique provides a powerful way to observe infection progress as early as possible," she says.

It is commonly believed that clubroot infects plants in two separate waves, beginning with the root hairs. Tu found that the parasite actually prefers to start in the root elongation zone, and that there is only one stage of infection.

If clubroot is the enemy, Tu is helping to reveal its battle plan. Her finding is just the beginning of the advances possible now that she has shown how to obtain pure samples of the parasite.

"She has demonstrated strong tenacity and industry by combating setbacks and succeeding in the establishment of this unique plant culture system," says her co-supervisor Yangdou Wei.

The next step is to help canola farmers by developing new varieties with resistance to the infection or a way to deal with the infecting spores which can lay dormant in infected soil for up to 20 years. Clubroot affects all cruciferous crops, including broccoli, cabbage and mustard.

Tu also studied canola during her master's degree at Huazhong Agricultural University in Hubei province, China. She says canola is a major crop across central China, including near her hometown.

Agricultural research partnerships between Canada and China introduced Tu to the U of S.

"I heard a lot about the U of S from my master's supervisor because he was a visiting scholar here and had many research partnerships. I wanted to continue research in canola and this is the best agriculture university, so I came here," she said.

"Agriculture: Food and Bioproducts for a Sustainable Future" is a U of S signature area of research.