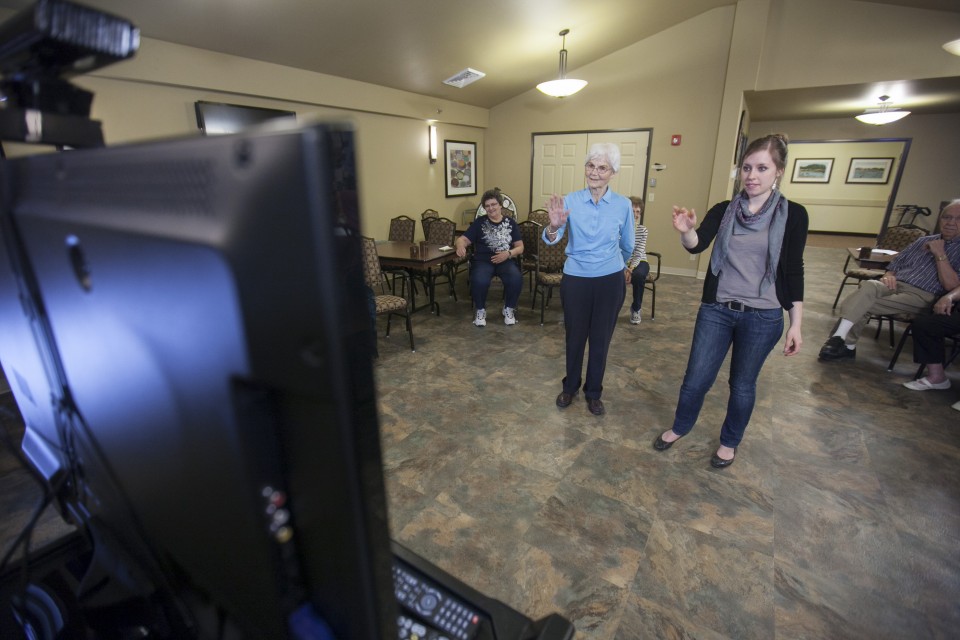 A major study at North Carolina State University has found that about a third of surveyed seniors played games at least once a week. These regular gamers showed improved emotional well-being and lower numbers of depression compared to non-gamers.

At the University of Saskatchewan, computer science PhD student Kathrin Gerling is ahead of the pack, already designing some of the first videogames specifically for senior citizens.

"A lot of senior residences are looking to integrate videogames into their leisure programs, but the Nintendo Wii or Xbox Kinect games aren't always suitable for their residents," she says.

Gerling is combining her passion for videogames with a desire to help the community, working with seniors in local nursing homes to make accessible games.

"One of the biggest problems in nursing homes is inactivity. People often sit in chairs and watch TV all day rather than participate in the activities offered. There's no physical activity. There's no mental stimulation," she says.

Gerling's research showed that seniors enjoy games with motion-based controls—where players control the game by moving their bodies instead of using a keyboard or controller.

"Many of the movements in games today are not accessible to people who have had a stroke, or are using wheelchairs and walking assistance," she says.

She and her colleagues worked with a physical therapist to identify movements most accessible for everyone.

Her group is also working on a game for people in wheelchairs. Movements such as rolling forwards and backwards are seen by the game's camera and used to control gameplay.

Gerling found that seniors appreciate topics related to their past, such as cooking and hunting.

"Something that repeatedly came up was shooting things and eating them. One of my games was a walk through the forest and there was a little bunny that hopped across the screen. These two ladies were saying ‘Now we'll shoot it and cook it!'" she says.

Following her undergraduate degree, Gerling worked for a videogame developer in her native Germany.

As a female in what remains a predominantly male industry, Gerling knows the feeling of being outside of the target audience. She remembers being a bit lonely working with 25 men and no other women.

"What I always missed working in the gaming industry was looking at the ‘why?' question. So many times they do things in a certain way just because it has always been done that way," she says.

Gerling returned to research for a master's degree. She then came to the U of S for a five-month internship, but stayed for a PhD.

In addition to research, Gerling teaches computer skills to seniors and volunteers with the Saskatoon Council on Aging.

She plans to leave her most recent collection of games in participating nursing homes for the residents to enjoy outside of the testing environment.

"Kathrin's passion for computer games, combined with her compassion for elderly people who live in nursing homes, has resulted in a blend of research excellence and practical significance in her work," Mandryk says.

Gerling receives funding from the U of S, the Natural Sciences and Engineering Research Council (NSERC), and Grand, a federally-funded Network of Centres of Excellence focused on digital media.