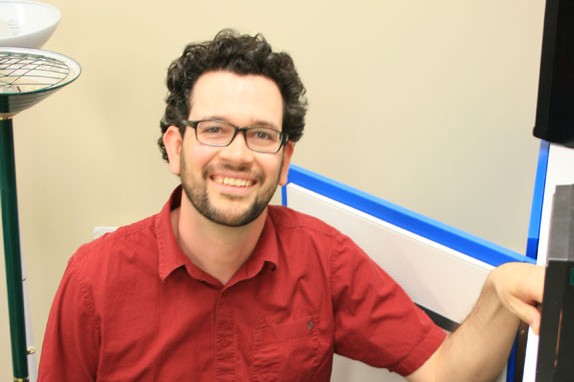 "What we're interested in is looking at how memory might be disrupted under certain conditions," explained Howland of the Neural Systems and Plasticity Research Group in the College of Medicine. "Stress has complex effects – it can facilitate or impair memory and cognition."

Howland and his team are studying how the brain adapts to changing circumstances to understand its "executive functions" like working memory, planning, attention, problem solving and reasoning.

The rats in question spend their work days in boxes that resemble mini–video theatres, complete with small screens. They learn to touch the screen when they see "image A" to get a food reward, while touching "image B" gives them nothing. Once they've mastered the task, the researchers switch it up so that image B now gives the reward – and they add a stressor such as mild foot shock.

"What we've found is if you give the stress right before you ask them to change the contingency to go from A to B, it actually improves performance. So they're faster," Howland said. "It's like an exam. You need to be a little scared of the exam. That's when you perform your best. You don't perform your best when you're perfectly prepared, and you have no arousal at all."

While the extra stress may give the rats an edge, it does not necessarily mean the knowledge will make it into long-term memory.

"You learned something yesterday, but it doesn't really matter today because you just experienced more stress. It's a totally different world now. You're much more interested in what you have to do to get out of the stressful situation, not what happened yesterday. So you've suppressed that memory."

In another project, the researchers mapped out some of the chemistry behind how stress affects memory.

Stress reduces activity in the hippocampus – the part of the brain where memories are formed. Once the stress is removed, activity returns to normal. Howland has found that by using a drug to block certain chemical channels in the brain called glutamate receptors, this effect can be turned off.

"That type of change in brain activity seems to be critical for the memory retrieval problems," he said. "We've really narrowed in and specified that change as being critical and that relies on glutamate receptors."

Howland explained these short-term stress effects are part of the body's emergency response system, originally evolved for immediate action such as escaping a predator. The brain sends a signal to the adrenal glands; the adrenal glands flood the body, including the brain, with stress hormones to respond to the threat. Ideally, everything returns to normal when the danger has passed.

Problems arise when, in effect, the alarm does not shut off – a common occurrence for humans in the fast-paced, stress-filled modern world.

"When the lion is about to chew your arm off, the stress response is absolutely essential. It's how you run away and survive. But you can't be in a cage with that lion forever."

Chronic stress has been linked to clinical depression, and while he specializes in the immediate stress response, Howland said there is a lot of overlap, and in fact some of the drugs used in his lab have gone on to become antidepressants. He hopes that understanding the short-term stress response will be valuable to other researchers working on chronic stress.