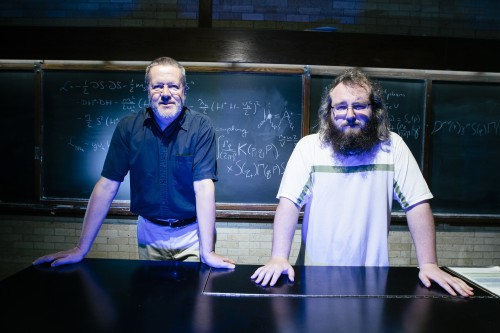 With funding from the federal agency NSERC, Sage is using theoretical physics to help unlock some of the deepest secrets of dark matter.

"Dark matter is ‘dark' because we cannot see it directly with our eyes, and yet we know that dark matter exists because of how stars and galaxies are moving in the sky," says Sage's supervisor and physics professor Rainer Dick.  He points out that without dark matter, some stars would simply stray off into intergalactic space.

It is likely that billions of dark matter particles pass through our bodies every second, Dick says. Most pass unhindered, but up to 10,000 times a year one dark matter particle collides with an atomic nucleus in the cells of our bodies. The potential collision rate is so low that it has not been linked to any health concerns.

Sage says it's difficult to predict the long-term effects of this theoretical work but it's vitally important to pursue the frontiers of new knowledge. "In the 19th century, experimentation with electricity and magnetism was simply a hobby for eccentric scientists," he says. "Now the entire planet glows at night."

In 2012, the Gran Sasso National Laboratory in Italy found new physical evidence for the existence of a dark matter particle. By observing an atomic nucleus in a controlled setting, scientists were able to spot a particle "bouncing off" what appeared to be nothing.  From these observations, they inferred dark matter's physical existence.

Using this physical evidence, Sage and Dick now want to explain the nature of dark matter by investigating it mathematically.

One of only a few research groups in Canada working with dark matter at the theoretical level, the team uses unique methods from nuclear theory to advance understanding of how atomic nuclei absorb or emit a Higgs boson particle. This long sought-after particle was tentatively confirmed only last March by European scientists in what was hailed as one of the greatest discoveries of modern science.

Sage's calculations are aimed at determining with unprecedented accuracy how often dark matter particles interact with atomic nuclei—work that could aid in the hunt for dark matter itself. His preliminary work indicates the Higgs particle interacts with atomic nuclei hundreds of times more strongly than what was originally thought.

Sage presented his preliminary findings at the 2013 International Baryons Conference in Glasgow, Scotland.

"This stuff is fascinating," he says. "We describe the fundamental constituents of the universe and try to discover how they fit with one another. "

Having a better understanding of dark matter creates the potential that one day scientists will be able to produce dark matter in laboratories such as Large Hadron Collider near Geneva, Switzerland, Dick says.

And new knowledge could be a small step along the way in helping solve one of the great challenges of science—reconciling Einstein's theory of general relativity with quantum physics in a new unified theory.

"Every piece of the puzzle is important," said Dick. "While we don't yet know all of the implications, they could be vast in many years to come."

Ryan Boivin is a graduate student intern with the U of S Students Promoting Awareness of Research Knowledge (SPARK) Program.

This article first ran as part of the 2013 Young Innovators series, an initiative of the U of S Research Profile office in partnership with the StarPhoenix.