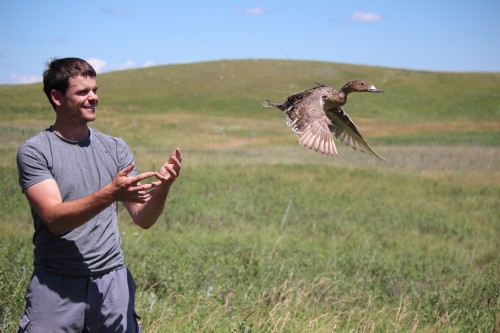 His study is the first to directly compare duckling survival in native prairie to survival in cropland planted with winter wheat.

The number of northern pintails arriving on the prairies each spring has fallen from 12 million in the 1960s, to 4.4 million last year. Johns led teams of about a dozen people in tracking 100 female pintails and their broods for a month after their eggs hatched.

Using radio telemetry and occasionally an airplane, each summer Johns' team searched for pintails and their nests in 18,000 acres of land, equivalent to about half of Saskatoon.

"It becomes personal at times. You get to know the duck's patterns and think ‘She's not going to beat me today!'" he says.

The decline is due to pintails nesting and raising their young in highly cropped areas. Agricultural machine work causes major nest destruction during the spring. The ducks that do hatch typically face a greater number of predators in cropland which can lower duckling survival.

Johns has found that planting winter wheat is a way to help increase local pintail populations without negatively affecting farmers. His study revealed that brood survival in land planted with winter wheat is nearly the same as survival in native grassland.

"As a result of this study and David's strong leadership, wildlife conservation agencies now have a much better understanding of the full benefits of winter wheat production, paving the way for more successful partnerships with producers across the Canadian Prairies," says Johns' supervisor, biology professor Bob Clark.

"This study shows that ducklings do fine in cropland with winter wheat and that if we used it more, it would actually help the population," Johns says.

Because winter wheat is planted in the fall, it has already sprouted when pintails arrive in the spring. The crop provides safe cover from predators for many nesting birds, including pintails. Most importantly, no machine work occurs until harvest when the ducklings are already gone.

"We knew winter wheat was good for nesting, but we weren't sure if we were putting our money and efforts into something that doesn't actually help ducklings survive. That's what this study answered. We found that, yes, ducklings are surviving when we use this unique landscape," Johns says.

Winter wheat also brings benefits to farmers such as improved water usage, reduced need for herbicides, and even higher yields. Much of the winter wheat adapted for the Canadian prairies was developed at the U of S.

Johns works closely with farmers, biologists, and conservation authorities. He sees the use of winter wheat as a win-win situation.

"If we can do something that benefits wildlife, people, and economics, then why not do it?" he says.

Johns is an outdoor enthusiast whose hobbies include hunting, fishing, and competitive cross-country skiing. His interest in the northern pintail began 11 years ago when he caught a pintail during his very first summer job.