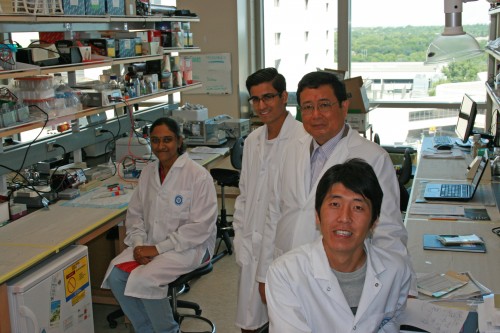 In his office in the new Health Sciences D Wing at the U of S, Xiang is surrounded by neat stacks of reference papers and manuscripts in various stages of publication. He brings up an illustrated presentation on his computer screen to explain his concept for a therapeutic vaccine technology.

"We restore the power (of the immune system)," he said. "We call this individualized or tailored therapeutics. Every individual, when we treat them, we give them their own weapon to fight their own disease."

While traditional vaccines are given before you get sick to prevent disease, a therapeutic vaccine is aimed at boosting the immune system of someone already sick.

Xiang is a senior research scientist with the Saskatchewan Cancer Agency and professor in the College of Medicine's Division of Oncology. Now over 60 years old, he admits he no longer pulls the 12-14-hour days typical of his earlier career. Still, grey strands are hard to spot in his thick black hair.

Xiang explains that in some ways, HIV (the virus that causes AIDS) and breast cancer patients present similar treatment challenges.

HIV-positive patients can take a cocktail of drugs that dramatically reduce the amount of virus in their body, allowing them to live near-normal lives. But this comes at a cost – tens of thousands of dollars per year for the drugs, plus side effects such as liver and skin problems, according to the World Health Organization.

Likewise, breast cancer patients can be treated with chemotherapy, radiation and surgery, but Xiang explained their doctors can never be absolutely sure they've cut out or otherwise destroyed all the cancer cells in the body.

Xiang's vaccine would "mop up" the last bits of virus or cancerous cells, in effect curing the patient of disease. The U of S Industry Liaison Office is exploring the commercial potential of the technology, and Xiang is seeking funding and partners to develop it further.

An analogy would be detectives in a police force (helper T-cells) identifying criminals and sending their pictures to the police station (dendritic cells). There, the information is made into many copies of a "wanted" poster and distributed to all police officers (killer T-cells) for enforcement.

HIV sabotages this system by attacking the helper T-cells – the detectives never make it to the police station, and the wanted posters never go out.

Xiang's therapeutic vaccine solves this problem by essentially providing the criminal's description directly to the police station. In practical terms, this means transferring genes from HIV to the dendritic cells. From there, the wanted posters (small bubble-like structures called exosomes) are churned out and supplied to the enforcer killer T-cells.

In cancer, specifically HER-2 positive breast cancer, the criminals have taken over and shut down the police station (dendritic cells). While the body's detectives may know they are there, there is no way to get word to the enforcers. Xiang's technique gets around this by producing the wanted posters (exosomes) independently, then supplying them directly to the enforcers to go after the cancer cells and potentially, cure the patient.

"Cancer has been the biggest problem for human health for a long time," Xiang said. "With the development of our health system, people can live longer. But the senior citizens, most will still die of cancer. Even in our modern society, cancer is emerging at a young age. This has become one of the biggest issues in health, this threat to human life."

One of the drawbacks of individualized treatment is that it is difficult to put into mass production. To get around this, Xiang and his team are working to develop a system to produce exosomes based on genetic characteristics that are common to a lot of people.

If past success is an indication, he won't be slowing down in his quest any time soon. So far, he has published about 200 papers and secured more than $7.6 million in grants from agencies such as the Canadian Institutes of Health Research, Natural Sciences and Engineering Research Council, and various charities devoted to cancer research.

"I enjoy science very much and I do it almost every day," he said. "I like it, so I work very hard. I'm doing very well with both basic and applied science. I'm having fun and now I've reached the peak of my career."

Xiang also enjoys some down time with his wife Tilly Ping, who retired two years ago from her job as a research technician at the Western College of Veterinary Medicine. "I like to listen to music, and to watch basketball. I like the Lakers, although now they're a bit down," Xiang said