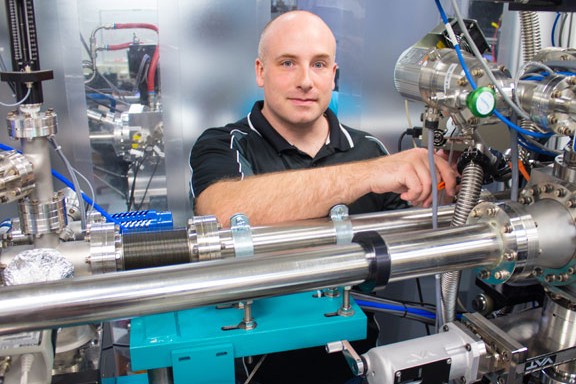 The material, called graphene, is the world's first 2D crystal.  Scientists first created graphene less than a decade ago by making the mineral graphite as thin as physically possible: a layer one atom thick.

Despite being so thin, graphene is flexible like rubber, a better conductor than copper, and 100 times stronger than steel—special properties that could make graphene ideal for use in everything from artificial muscles, to futuristic foldable computer display screens.

"Graphene is arguably one of the most promising materials in materials science today," says Alexander Moewes, Hunt's supervisor and U of S Canada Research Chair (CRC).

But to use graphene for the technologies of the future, scientists need to more fully understand the material. Using the synchrotron at the U of S, PhD student Hunt has revealed a number of graphene's previously unknown properties, focusing on graphene's potential to improve solar energy cells.

"I am driven by one goal alone:  cheap and clean energy for all," says the father of three who returned to the university after three years working in industry.

"We need to come up with ways to supply energy that allow people to live the advanced lifestyle they have, but also doesn't destroy the planet or harm the economy."

Graphene-based solar cells would be both cheaper and more versatile than today's large solar panels. Acting like a ‘solar skin' on top of a house, car or electronic device, the graphene-based cell could mould directly to the shape of whatever it powers.

These solar cells could be made with a form of the material called graphene oxide. The added oxygen atoms allow graphene to absorb light much more effectively. However, they also cause the material to break after a short time.

Hunt used the synchrotron to explain precisely what happens on the molecular level to cause that breakage. He then found a way to prepare graphene oxide which prevents the breaking process from happening.

Use of the synchrotron was essential for Hunt's findings.

"The synchrotron allows me to see where the electrons are in respect to one another and how they interact," he says.

Hunt examines how synchrotron light interacts with materials. Each atom and each atomic bond interact with light differently. When the frequency is just right, the atom resonates, allowing him to identify a material's molecular structure just as a musician with perfect pitch recognizes a G note when the proper guitar string is played.

Moewes and Hunt collaborated on a publication of this research which earned a nomination for the ENI, an Italian award billed by journalists as the Nobel Prize of green energy.

Scientists are excited about the possibility of using cheap, organic materials such as graphene to replace the expensive, toxic metals used in today's solar panels.

"Currently, organic solar cells are uncommon in the marketplace because they only last half as long," says Hunt.

Research into the durability of graphene oxide is crucial to making the material a viable option for solar energy.

Hunt has made other discoveries that explain how graphene oxide acts as a semiconductor, important knowledge for using graphene in the next generation of computers.

Hunt's research is funded by his three-year grant from the Natural Sciences and Engineering Research Council (NSERC), the CRC program, and the U of S.

Thomas Onion is a graduate student intern in U of S research communications. This article first appeared as part of the 2013 Young Innovators series, an initiative of the U of S Research Profile office in partnership with the Saskatoon StarPhoenix.