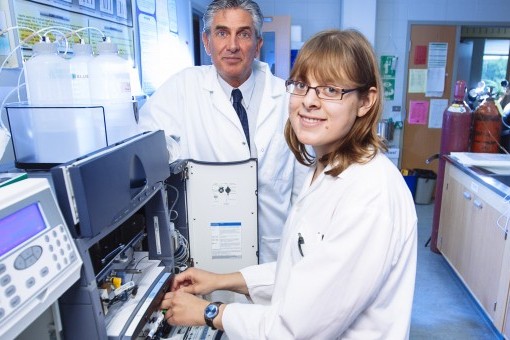 "We are like detectives as we develop analytical protocols to catch crooks who intentionally adulterate our foods," says Low, whose lab is one of the few in the world that develops food fraud detection techniques for industry, government, and private companies.

Estimates of food fraud range from five to 10 per cent of all Canadian food production.

"If one estimates the value of the Canadian food supply as $1 billion, then at five per cent we are looking at serious economic fraud," says Low.

Food adulteration can also be a significant health issue. In 2008, the compound melamine, used to make fertilizers, plastics, and concrete, was added to a supply of dairy products in China.

When added to food products, melamine â€˜fools' chemical tests by mimicking protein, creating artificially high results for a food's protein content.Â The result of this adulteration: more than 300,000 people got sick and six babies died.

Willems and Low are now working on detecting adulteration of agave syrup, a table top sweetener for people counting calories and those concerned about their blood sugar levels such as people with diabetes.

Produced from the sap of the agave plant, the syrup is primarily grown in Mexico and is used as the major ingredient in tequila. Agave syrup is 50 per cent sweeter than table sugar so you can use less of the sweetener and consume fewer calories. The syrup also has a much lower glycemic index compared to table sugar or honey.

In an article published in the Journal of Agricultural Food Chemistry, the team developed methods to detect undeclared additions of high fructose corn syrup, beet and cane sucrose, and starch syrup to agave syrup.

Willems' methods have been adopted by the International Organic Agave Alliance, the food regulatory agency of Mexico, and companies such as Eurofin Scientificâ€” the largest food analysis corporation in the world.

"Jamie was the driving force for the completion of this very complex adulteration detection problem," says Low.

She is now working on developing a food ingredient tracking system using molecular tags to track food products from farm to fork.

This involves developing both non-toxic organic molecules that can be safely added to foods and new technology to detect the tag at any stage of the supply chain. Once a product has been tagged, scientists can tell if it has been adulterated because the tag will either be at a lower concentration (partial adulteration) or absent (complete substitution).

Willems is also developing ways of detecting juice-to-juice adulteration. These findings could help detect debased juices with similar chemical compositions, such as when pear juice has been added to apple juice to cut costs.

The goal is to create the foundation for a comprehensive food tracking and authenticity system.

"For Canadian consumers, this should result in a safer and more nutritious food supply," says Willems.

Ryan Boivin is a graduate student intern with the U of S Students Promoting Awareness of Research Knowledge (SPARK) Program.Â

This article first ran as part of the 2013 Young Innovators series, an initiative of the U of S Research Profile office in partnership with theÂ StarPhoenix.