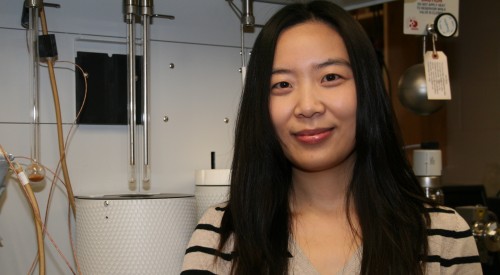 Alongside her supervisors Lee Wilson and Lalita Bharadwaj in the Department of Chemistry, PhD student Rui Guo has developed biopolymer materials with enhanced adsorbent properties. Referred to in scientific circles as smart materials, Wilson said Guo's synthetically engineered biopolymers hold enormous potential in various applications, with water remediation being the most notable.

Guo, 31, moved to Saskatoon from China, finishing her undergraduate education at the U of S in 2007. She has been here ever since, and is now in the final stages of writing her thesis.

"Some of my dad's friends graduated from the University of Saskatchewan, and they said it was a very good academic environment here," said Guo of her motivation for coming to Saskatoon.

"I'm not going to say it's because of the nice weather," she added with a laugh on a particularly frigid January afternoon.

With Guo's laboratory experiments showing considerable promise, large-scale applications are already in the works. Wilson and Guo will soon be working with a professor in Guyana on an international project looking to capture various contaminants in surface water bodies.

Closer to home, Wilson said Guo's smart materials could also be used to remove arsenic from both surface and ground water in Saskatchewan.

"Wherever you find gold or uranium, you will also find arsenic. Saskatchewan has an arsenic problem, and we can potentially use Rui's materials to address this."

Smart materials, like the ones developed by Guo, are novel in their ability to essentially turn on and off in response to external stimuli, such as changes in temperature or pH balance. While filtration methods like reverse osmosis require pressure to remove molecules or ions, minimal energy inputs are required for smart materials to function.

"We are running out of fresh water. It's not a question of if, but when," he said. "So the ability to, for example, desalinate water using little to no energy would be huge. This could address water quality issues around the world."

Guo has already won several awards for her research and is an author or co-author of seven peer-reviewed publications— including an invited review from Bentham Science Publishers this past May.

"It's not often that people get asked to do invited reviews at a graduate level," said Wilson. "She's one of the few examples where that has happened, at least in the history of this department. It's a big achievement."

Guo has also taken a double course load throughout her graduate studies, supplementing her courses in chemistry with an equivalent number of courses in toxicology. So how does she achieve such success amid academic pressures that would make many others crumble?

"I don't really know," she said, smiling. "Just study and study and study I guess. A lot of hard work and tremendous help from all the people in our department, especially my supervisors and group members."

In a discipline where women have always been underrepresented, Wilson said Guo also serves as an important role model.

"In every discipline, but especially in the sciences, it's important to encourage gender equity," he said, noting there is currently only one female faculty member in the Department of Chemistry.

"Science is maybe an objective discipline, but there is a lot of subjectivity that comes into play—how you interpret things, how you decide to forge in a new direction—and I firmly believe that encouraging women to enter the sciences is important in balancing some of those decisions."