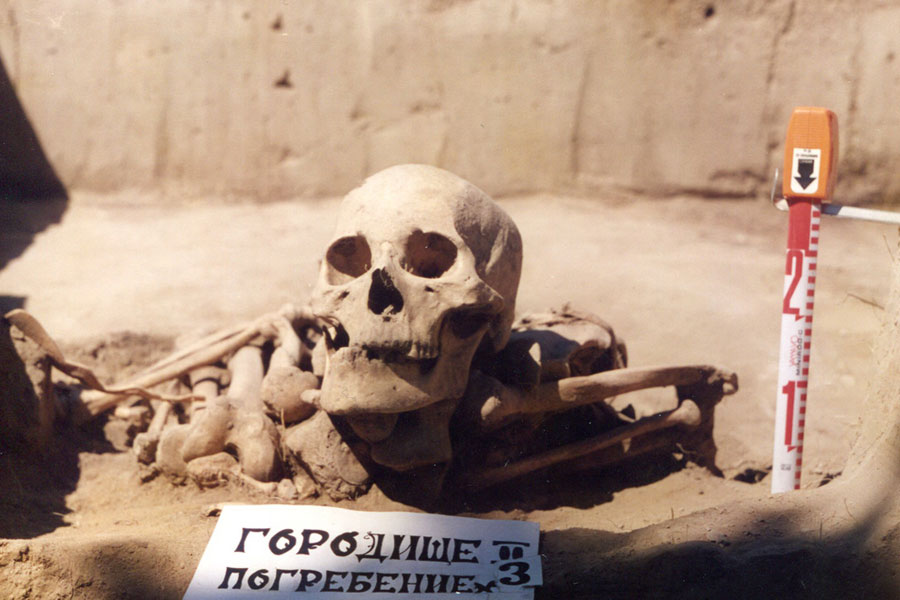 "This represents one of the earliest cases of human cancer worldwide and the oldest case documented thus far from Northeast Asia," said Lieverse, a bioarchaeologist at the University of Saskatchewan. The findings are published in the journal PLOS ONE.

Lieverse worked with Baikal– Hokkaido Archaeology Project colleagues Daniel Temple from the U.S. and Vladimir Bazaliiskii from Russia to examine the skeleton of an Early Bronze Age man. Exhumed from a small hunter-gatherer cemetery in the Cis-Baikal region of Siberia, he was not in good shape.

By the time it took him, the cancer had riddled his bones with holes from head to hip, including his upper arms and upper legs, and virtually all points between. As he lay dying, severe pain and fatigue would have been his constant companions, punctuated by periods of panic as he struggled to breathe.

When he passed, his community buried him in a fetal position in a circular pit. Unlike most men of this period, who would have been buried lying on their back with fishing or hunting gear, he was laid to rest with an ornamental bone and a bone spoon, intricately carved with a winding serpent handle. The researchers estimate he would have been between 35 to 40 years old.

Lieverse and her team performed a differential diagnosis on the man's remains, just as if he had died recently. After ruling out possibilities such as tuberculosis or fungal diseases, the most likely culprit was metastatic carcinoma, that is, cancer that starts in one part of the body and spreads.

"It's clear the disease had progressed considerably, metastasizing far beyond its original location in the body and contributing to his death," she said. "His age and sex and the lesions on his bones point to lung cancer or possibly prostate cancer."

Lieverse explained that ancient skeletons exhibiting signs of cancer are quite rare, sparking the hypothesis that the disease is mostly a recent phenomenon, reflecting various aspects of our modern lifestyle. Siberia's Cis-Baikal is a vast, mountainous region northwest of Lake Baikal. It is the deepest freshwater lake on earth, home to the world's only freshwater seal, which would have made up part of the man's diet, along with fish, wild game and seasonal plants—there were certainly no processed foods on the menu.

These latest findings provide evidence that may help refute this hypothesis, Lieverse said. She suspects that, taking into account variables such as longer life expectancies, cancer may have been considerably more common in ancient times than is generally presumed.

"As we become more familiar with what metastatic carcinoma looks like in the skeleton, the number of cases identified by bioarchaeological research is likely to increase," she said. "A related example is scurvy. Once we knew what scurvy does to the skeleton and became familiar with the signs, identification of the disease increased."