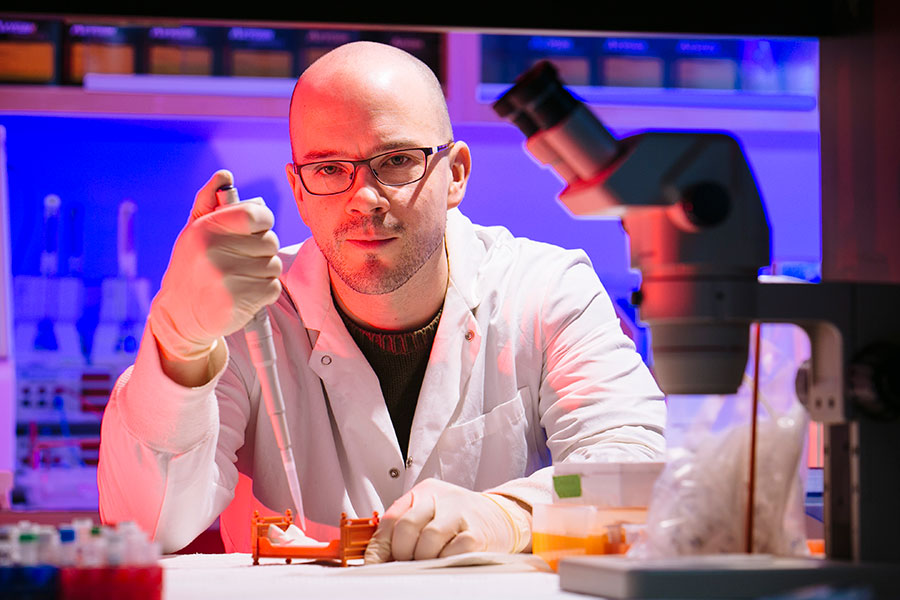 Thought to be eradicated in the 1950s, the blood-sucking insects have experienced a global resurgence due to increased travel, insecticide resistance and increased use of second-hand furniture. In the last 20 years, Saskatoon's bed bug infestations have skyrocketed, said Armstrong.

Armstrong, a master's student, is studying bed bug DNA to provide insight into the evolution of bed bugs and other insects, and help trace the origins of infestations.

He has identified 90 per cent of the DNA in bed bug mitochondria, the energy producers in cells. He presented his findings at a national conference in September.

Funded by the Natural Sciences and Engineering Research Council, his study will be the first to map the complete bed bug mitochondrial genome. Mitochondrial DNA sequences, unique in every species, are always inherited from the mother and do not change in the offspring.

As little is known about bed bug mitochondrial DNA, the research could be useful for extermination or prevention practices.

"This work may also help lawyers, for example, determine the potential source of infestations in properties based on the genetic diversity or similarities of the samples collected," he said.

Armstrong collected bed bugs from infested houses to determine whether they originate from the same genetic source.

In the lab, he grinds bed bugs into a paste and puts them into tissue-dissolving chemicals to free their pure DNA. He then sends the DNA to a U.S. lab for sequencing and obtains small chunks of DNA code which he puts together to identify the full mitochondrial genome.

"It's pretty much what you see in TV crime shows like CSI," he said.

Bed bugs are professional hitchhikers, moving around on people's belongings and making it difficult to track them down. They can also flourish in crowded agricultural settings such as poultry farms.

"Poultry farms are like buffets for bed bugs," said Armstrong. "With no humans around, they can feed on any warm-blooded animal. They are opportunistic—a free meal is a free meal!"

Bed bugs don't themselves carry diseases, but if a virus or bacteria lives on a bug's body, there could be a chance of infection when the bug ingests human blood, said Armstrong. He noted that flesh-eating disease bacteria, resistant to antibiotics, have been found on bed bug carcasses in Vancouver.

"I have suggested practices to detect bed bugs, such as carefully checking returned books, putting them in the freezer for at least a night, quarantining them and positioning traps to capture bugs," said Armstrong.

Ann-Marie Mathieu, deputy library director of the Saskatoon Public Library, says there have been very few instances of bed bugs in returned materials borrowed by the public.

"The monitoring protocols James helped develop have been highly effective in safeguarding the collections and facilities," she said. "In fact, they have also been adopted by other public libraries throughout the province."