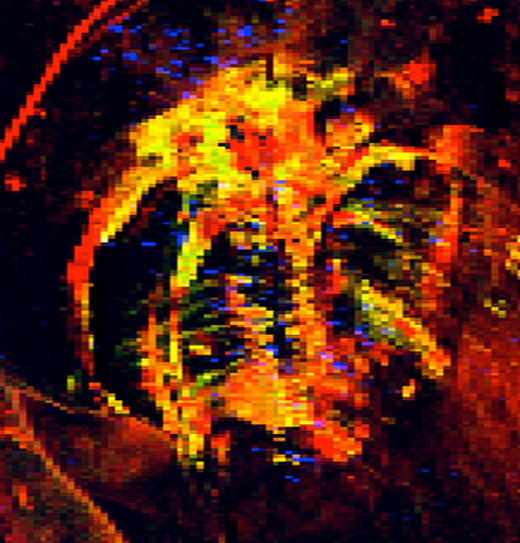 Some of the first complex animals on earth likely bled a beautiful robin's-egg blue, according to research.

"This is essentially the first report of evidence for invertebrate blood in the fossil record," said Brian Pratt, the paleontologist and professor who led the research team whose results are published in the journal PALAIOS.

The team examined fossils of an elegant, feathery, bug-like arthropod called Marrella splendens excavated from the Burgess Shale, a UNESCO World Heritage site in British Columbia. Dated at just over 500 million years old, the rich fossil beds record the incredible biodiversity that was reached during the Cambrian Explosion which began some 40 million years earlier, when most of Earth's major animal groups appeared.

Pratt explained that most sedimentary rocks preserve only hard parts, like shells and skeletons. The fine-grained rock of the Burgess Shale, on the other hand, is a "geological miracle" that provides exquisitely detailed impressions of soft-bodied animals, ranging from a centimeter in size, like Marrella, to more than half a metre in length, like the famous Anomalocaris, a bizarre swimmer with stalked eyes and two large tentacles protruding from its head. Even so, the fossils generally provide little information about the composition of the soft tissues, the physiology of the animals and what they ate. But Marrella specimens are often surrounded by a black stain interpreted as coming from body fluids, most likely blood.

While other researchers had analyzed some of the fossils via scanning electron microscopy, none had enough resolution to detect trace elements within individual specimens. The U of S team, which included Canada Research Chairs Graham George and Ingrid Pickering, postdoc Jake Pushie and PhD student Tracy MacDonald, used one of Canada's most powerful analytical tools to break through this limitation.

Using the Canadian Light Source synchrotron at the U of S, the researchers used a microfocused beam of X-rays to detect minute amounts of elements within the Marrella fossils. What they found was copper.

"This indicates that at least one arthropod lineage was using copper, most likely hemocyanin, as an oxygen transport molecule in their blood," Pratt said. "This isn't terribly surprising in and of itself, since modern crustaceans use hemocyanin, but we think it adds an important dimension to the tiny fossil record of blood such as in a couple of insects in amber and in rare dinosaur bones. It shows that we should keep looking with the right tools."

Copper-based hemocyanin differs from iron-based haemoglobin used by other animals, including humans, to transport oxygen to their tissues. Hemocyanin is only about one quarter as efficient at transporting oxygen at warmer temperatures, but outperforms its iron-based cousin in cold, even near-freezing, oxygen-poor environments. One of the world's most successful species in terms of longevity, the horseshoe crab, uses hemocyanin which gives its blood a bright blue colour. The lineage of these "living fossils" stretches back more than 450 million years. Marrella, though, seems to have appeared abruptly and then went extinct soon after.

Marrella fossil as it appears under visible light. Synchrotron X-rays revealed elements preserved in the fossil, including copper, indicating what the creature likely used for blood.