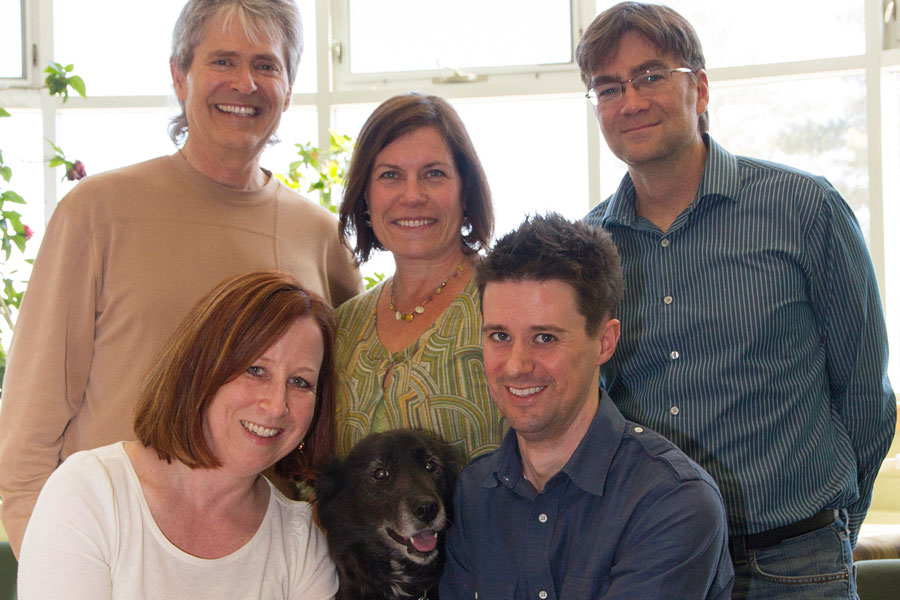 Professor Troy Harkness from the Department of Anatomy and Cell Biology and Dr. Terra Arnason, a biochemist and clinical endocrinologist with the College of Medicine, have moved their research on drug-resistant cancer across campus, to the WCVM, to explore dogs as models for research designed to help humans. It is an intriguing step that challenges the traditional mouse model for cancer research, and it is one that is showing exciting potential.

"Yes, you can learn a lot with mice," said Harkness, "how cellular mechanisms might work, how drugs might work. It gives you an indication that yes, this might work," but might is the key word in his statement.

"Everything we're doing is to try to figure out how human disease can be helped," he said, but time and again, promising results in mice show no benefit for humans. Arnason said Type 1 diabetes can be cured many different ways in mice but none work for humans, and a significant number of clinical trials on inflammatory mechanisms that worked in mice failed in humans.

"The benefits you see in mice studies—the eureka moments— have been very disappointing in humans," she said. "Mice are genetically so similar that it's become such an artificial system. The true advantage of our dog system is that they're just like us, from completely different backgrounds. Basically we're all mongrels."

Human and dogs also both develop lymphoma spontaneously, the canine version being very similar to non-Hodgkin's lymphoma in humans. Both respond to the same treatment and both develop resistance which is what Harkness, Arnason and their colleagues—Dr. Val MacDonald, a veterinary medical oncologist, and Dr. Casey Gaunt, a small animal internal medicine specialist, both from the WCVM, and Tony Kusalik, a bioinformatics researcher in the College of Arts and Science—are exploring in their trial which recently received $165,000 from the Canadian Cancer Society.

The team is studying the effect of metformin on dogs with drug-resistant lymphoma. Metformin has been used to treat Type 2 diabetes but studies have shown that people on metformin develop cancer less often than people who are not.

The advantage of "moving up the evolutionary tree step by step" from mice to dogs to humans is that dogs' compressed life span means researchers can see the disease progress much faster than in humans, said Harkness. Tissue and blood monitoring allow earlier detection of the markers pointing to drug resistance.

"Right now, the detection of drug resistance is often too late for humans," said Arnason. "It could be weeks or months before the resistance is clinically apparent and then you're administering toxic drugs that may be ineffective."

Arnason admitted the researchers had not considered using dogs until they received what she called "a serendipitous phone call" from MacDonald at the WCVM. MacDonald had read a story in this paper in December 2011 about Harkness' work with drug-resistant breast cancer cells "and she called to say, I have drug-resistant dogs. When we talked to her, we realized we've got applicability, we've got accessibility, we've got relevance, and we've got short lifespan. It's perfect."

Harkness and Arnason agree their research would not be progressing as it is had they not worked at a university with a veterinary college. Dogs, said Harkness, "just aren't that accessible. Not all vet schools in Canada actually have an oncology department, but ours does."

Even with the veterinary college in such close proximity, it has not been an easy journey. First, there is a shortage of dogs for the trial. Harkness and Arnason have funding for 25 dogs a year but so far, they have only been able to enroll a handful. In most cases, by the time the dog shows drug resistance, the owners have paid as much as they can for treatment. To lessen the financial burden, the researchers are offering $1,000 per patient to offset the cost of drugs.

The time commitment to doing the research is proving to be another hurdle. "The clinicians at the WCVM still have full-time clinical practices," said Arnason. "They can't increase their numbers because they're already saturated and they don't have technical support," but the human and veterinary medical researchers remain committed to the project.

"If we hadn't connected on a personal level, I don't think this would have happened," said Arnason. "We really had to push for time, push for connections, push for money, everything. It was just the determination of the group of five of us to do it."

The WCVM and the College of Medicine provided $20,000 in seed money for the pilot study "and that was what gave us the preliminary information to go to the CCS for additional funding," she added.

And there is more to come. "We've got a lot of plans," said Harkness," including a five-year, $1 million grant proposal to the Canadian Institutes of Health Research (CHR) to move to human cancer behaviour. "We're trying to test whether the observations we see in the tissue cultures and in dogs actually apply to humans," said Arnason. "We call it translational research—from bench to bedside."

With word of the dog trial results spreading rapidly, Harkness said he is seeing interest from other researchers in moving away from the mice model. And Arnason presented their research at a conference in Chicago in the hope of encouraging others to use dogs as a cancer model rather than going directly from mice to humans.

Even with their success using dogs, Harkness and Arnason believe there is still a role for mice in basic research.

"We're still amenable to using mice because they can answer questions," he said, "but the difficulty comes in asking, what does this mean for humans? Whatever we see, we have to tread carefully in our interpretations."