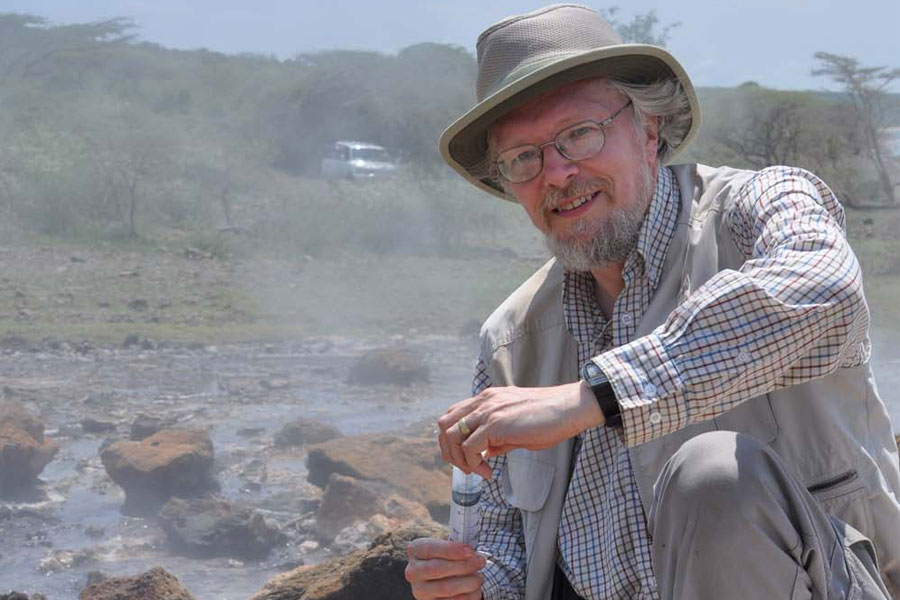 "I've seen it many times so I've become somewhat accustomed to it, but it's really one of the most awe-inspiring sights in the world," said Robin Renaut of the spectacle of more than a million lesser flamingos that once gathered at Lake Nakuru in Kenya.

Renaut, professor in the Department of Geology, has travelled to Africa's Great Rift Valley frequently in the past 35 years to study the geology of the valley's lake system, both as they appear today and in the deep past. What he is learning is informing modern wildlife management in Kenya. It may also shed light on the ancient environmental pressures that pushed genus Homo to take the first evolutionary steps that eventually led to Homo sapiens – modern humans.

Today's humans in Kenya have more immediate concerns, foremost among them the highest water levels in the past 50 years.

"The ecology of several lakes has changed because of flooding," Renaut explained. "Lake Nakuru is normally saline and alkaline, but with the heavy rains it has become fresh."

This freshening has led to steep declines in the cyanobacteria (formerly named blue-green algae) on which the flamingos feed. The cyanobacteria, whose reddish-orange pigments give the birds their distinctive colour, grow best in saline waters rich in sodium carbonate and other minerals.

High waters have also inundated lakeshore roads and pushed the lake's shoreline inland as much as two kilometres. This has flooded high-end resorts and government facilities that cater to the more than 250,000 tourists drawn to the lake's star attraction – its flamingos.

"Almost all the flamingos have left," Renaut said. "Many have moved to Lake Bogoria, another saline, alkaline lake 60 kilometres to the north. It's also high and more dilute than normal, but still provides enough food for the flamingos."

High water has also inundated local farmers' homes and fields, and heavy rains have carried much more silt into the lakes from over-grazed hillsides. These worrisome events prompted the Kenya Wildlife Service to gather together international experts at a symposium in late 2013. Renaut, with his extensive connections and experience in the area, was invited as keynote speaker. His research has revealed a cycle of high water that comes every 50 to 60 years. For example, records show high water in 1961 and a photo from the turn of the 20th century shows lake levels similar to today.

"It's reasonable to assume the lakes will go back down, although it will take at least five or six years to get back to normal," Renaut said.

Meanwhile, soggy conditions have disrupted research to literally dig into humankind's deep past by drilling into lake sediments. The Great Rift Valley is home of the oldest fossils and artifacts ever found of hominins, precursors to modern humans. Renaut is a principal investigator and one of about 40 international researchers on the Hominin Sites and Paleolakes Drilling Project (HSPDP), led by Andrew Cohen from the University of Arizona.

One of the project's aims is to further test the savannah hypothesis that postulates hominins were forced to adapt as the climate became drier and forests were replaced by broad grasslands. These environmental pressures led to adaptations and behaviours such as upright walking, tool making and increased intelligence.

"The hypothesis has been around for at least 40 or 50 years, but nobody thinks it's that simple anymore," Renaut said.

One of the missing pieces of the puzzle is just what the climate was doing hundreds of millennia ago. To find out, the researchers are drilling cores deep into several lakes and ancient lake sediments in the Kenya and Ethiopia rifts. Since the sediments were laid down at the same location where early hominins lived, they should reveal what climate and environmental pressures they presented.

"We're drilling the lake sediments very close to where the hominin fossils were found," Renaut said, adding that each core will take about three years to analyze fully. "It's a long-term project."

Cores have also been drilled by another team from the Smithsonian Institution in the U.S., which provides more information as well as a crosscheck for the HSPDP team.

"HSPDP will produce a wealth of new data to help test hypotheses about some of the factors that drove human evolution," Renaut said. "Our aim is to provide a detailed, high-resolution environmental context for human evolution for the areas where our early ancestors are known to have lived."