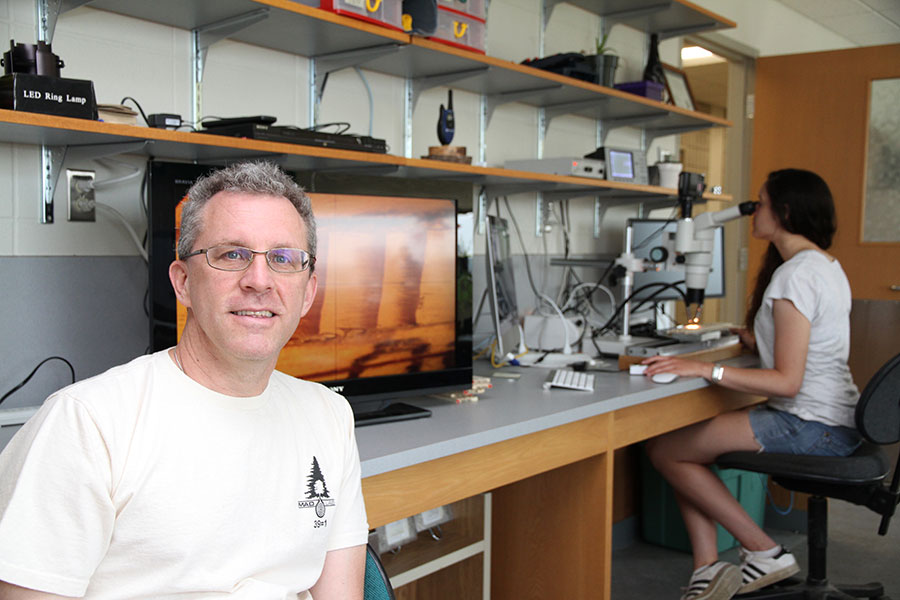 Colin Laroque, a dendrochronologist at the U of S, spends his time discovering all the stories trees have to tell: from damage caused by oil sands production, to the value of shelterbelts, to the age of hockey sticks and pieces of the Titanic.

"If you've ever sat around a campfire and looked at the rings of a piece of fire wood, or counted rings on a near-by stump and said ‘this tree was this old,' then you've scratched the surface of what dendrochronology is all about," said Laroque, a professor in the College of Agriculture and Bioresources and the School of Environment and Sustainability. "We look at individual tree rings and they each tell us a story about the environment that the trees grew in."

Using a hand-held auger about the length of a forearm and slightly smaller in diameter than a dime, Laroque and his team of students have collected tree samples from coast to coast. With a library of samples numbering in the thousands, Laroque searches for answers about history, climate change and different types of industrial development.

Holding a radial piece of pine, Laroque points out the varying widths of the rings. "Basically, we look at how wide the rings are. The wider the ring means the better the growing environment was that year, narrower means a poorer growing environment."

Each tree species, he continued, is like a unique individual with specific likes and dislikes: some prefer lots of water others less, some like heat, some not so much.

"Trees let us go back in time because their stories are locked into their ring patterns. So I can ask 100 trees about something that happened 50 years ago in their environment, and if I get the same answer from each tree, I can be pretty sure about what the conditions were like. The trees can help tell us about past temperatures, flooding events, insect cycles, etc."

On the same cross section of pine, he pointed to the lighter coloured rings toward the outside and darker rings closer to the middle of the disc. "The lighter rings are newest, where the sap is still flowing and nutrients are still being transported in these rings. In the darker rings in the heart of the tree, the sap has stopped flowing; these rings are now mainly used for support for the tree."

The sapwood system also transports chemicals that are introduced into a tree's growing environment through industrial development. This means by pinpointing the existence and concentration of chemicals within the rings, Laroque can determine the extent of degradation specific industrial activities have had on the environment. And because these chemicals are not transported beyond the lighter rings, he can accurately connect chemical levels with peaks and dips in industrial production cycles over recent history.

Laroque and his team collected tree samples in Saskatchewan and continued for another 400 km as they travelled down the Clearwater and Athabasca Rivers. "We asked permission of the Clearwater River Dene Nation to start on their traditional lands to examine the damage. Trees, berries, moose, fish are all important parts of their environment and are being affected," he explained. "We thought we might be able to detect some affect, but not as deep into Saskatchewan as what we found."

Laroque's findings were recently submitted for publication in the Proceedings of the National Academy of Sciences.

With colleagues in the College of Agriculture and Bioresources, Laroque is also working to determine the economic benefit of the Shelterbelt Program, which until cut by the federal government in 2013, subsidized planting trees and shrubs on farmland to prevent erosion.

"We are looking at how shelterbelts grew in the past, how they will grow in the future, and the benefits including carbon sequestration, warmth in winter, wind protection and water control. Many farms are currently ripping out their shelterbelts, but we want to show the economic benefits of shelterbelts."

Laroque's expertise of all things wood is frequently sought out for a variety of projects. "We deal with a lot of artifacts and date items for archaeologists and historians."

He was involved in dating the Moffatt Stick, a hockey stick that, after four years of investigation, was determined to be the world's oldest. "The Moffatt Stick is from 1838. Previous to that, the oldest was the Rutherford Stick made in 1852 and reportedly sold for over $2 million U.S."

PBS also called upon Laroque for its television program History Detectives. The case was to determine the origin of a piece of ship railing and "it turned out to be from the Titanic."

All of this work falls under something Laroque calls history mysteries.

"Trees can help us figure out what happened in the past, so we can try to avoid some of the same mistakes and plan better for the future."