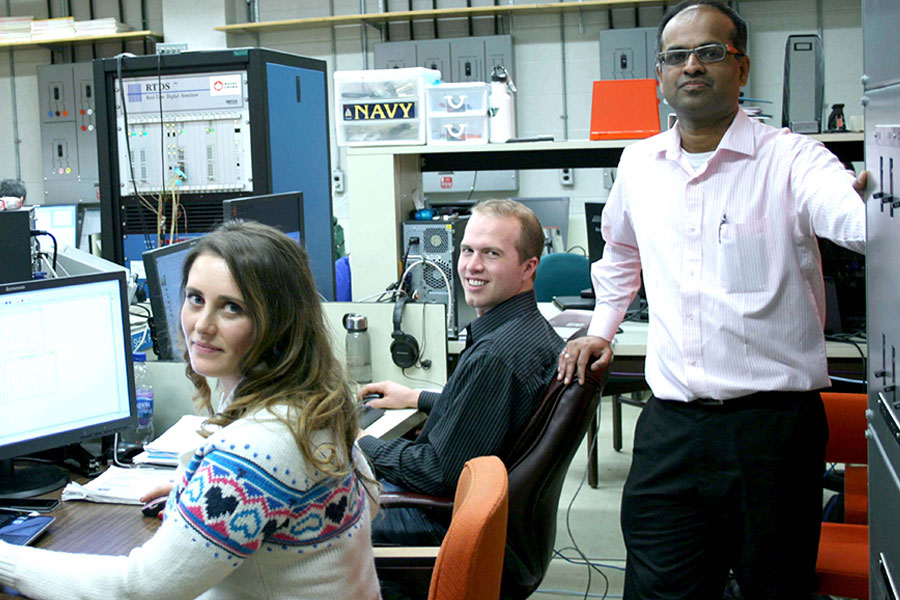 While the power industry has embraced these advances, Gokaraju explained there is still much potential for improvement, particularly in real-time power system simulation and operation. This would allow operators to respond to changes in the system more quickly.

"A lot of things, even though they call it ‘real time,' it is not strictly real time," said Gokaraju. "They plan a few hours in advance, one day and one week in advance."

Electrical systems have a vast range of demands on them, from the miniscule load of a household toaster to the multi-megawatt draw of industry. Saskatchewan's electricity must be co-ordinated from a variety of sources and locations, all with differing capacities. Connecting these sources with customers is a grid of transmission lines studded with control systems to both deliver and modulate the power.

"It is an interconnected system. Anything changing at one place will have an impact on a different portion of the network and that happens in a few seconds or even less than a second," Gokaraju said.

This means information about where and when power is flowing must also travel at lightning speed. Gokaraju explained it is crucial this information be "time stamped," something smart-grid technology achieves through global positioning system (GPS) clocks. This allows precise control of the system.

"What can be done is measurements can be taken and synchronized with the GPS clock. We can get all that information simultaneously and institute system separation, that is, create ‘electrical islands,' so instead of putting all customers in the zone out of power, it can be confined to the local fault area."

This capability to isolate problems is key to a stable electricity supply, and for the most part, it is extremely reliable. Occasionally, however, something goes wrong. For example, in 2003, control centre computer failure and untrimmed foliage caused a blackout in Ohio that affected other networks, knocking out power to about 55 million people in Ontario and several Midwestern states.

"It was a domino cascading effect and in matter of few minutes, the whole thing was down," Gokaraju said.

That such an event is rare is testament to thousands of simulations that are run to anticipate problems before they occur. Gokaraju and his team are working to improve these simulations, with the goal of limiting blackouts to as small an area as possible.

Smart-grid technologies are also being employed where demand for electricity conflicts with public attitudes and regulation. For example, Gokaraju described a Japanese utility that added a 500-MW power plant to meet demand but was refused permission to upgrade main lines. That meant the utility had to supply the increased power through existing lines.

Without smart-grid technologies, said Gokaraju, this would push the lines uncomfortably close to design limits, so the Japanese ran real time computer simulations to plan for contingencies. "They (the Japanese) put the whole thing on a simulator and run the simulations in parallel to the actual grid operation," he said.

Gokaraju and his team have been able to match the real world, in real time—strong evidence that their smart grid solutions are dependable.