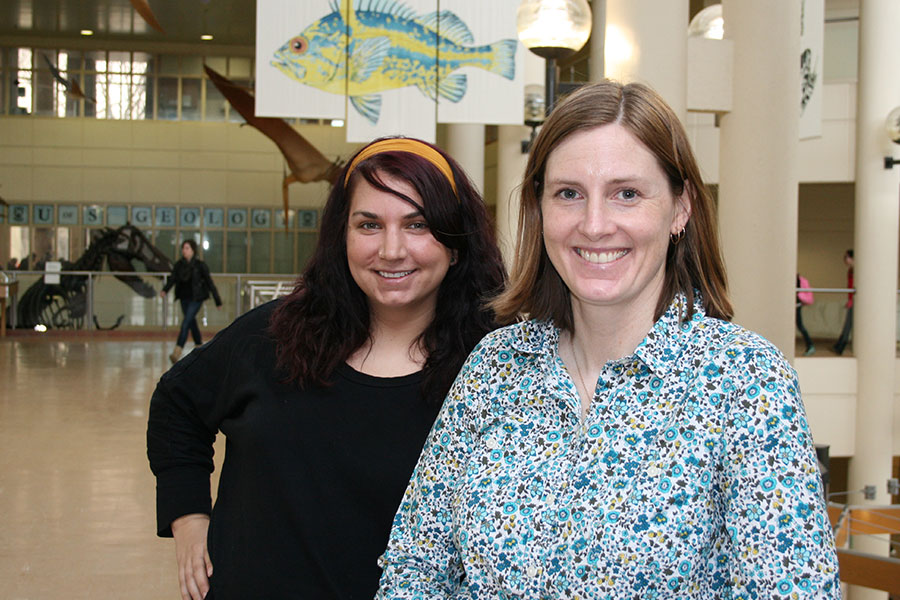 Christy Morrissey, assistant professor of biology, has been doing research at Chaplin Lake for two years, drawn by the chance to study such incredible numbers of migratory shore birds. This spring, though, her focus will be on recruiting and training a special group of people to help her gather data— the people who live on the shores of Chaplin Lake.

Morrissey was one of the recipients of the university's new community engaged scholarship research seed funding and she is using it to get the people of Chaplin involved in her monitoring. It is a project called connecting migratory birds with the community and all it needed was some funding for it to take flight.

"There is literally no funding for engagement that researchers can apply for and yet lots of us like to do it, and lots of us are already doing it," she said. "When the funding was made available, I had a project perfectly aligned."

While bird numbers are high—about half of the entire North and South American population of Sanderlings move through Chaplin Lake on spring migrations—they are declining for reasons that are not yet fully understood. It could be contamination, loss of habitat or the effects of climate change. Whatever the cause, Morrissey said the people of Chaplin have a real interest in preserving their unique resource.

"They have a nice nature centre there and they have this really abundant, rich lake so it's a perfect combination. The community is looking to protect the lake and the shore birds so the goal is to set up long-term, scientifically based monitoring that gives ownership to the community."

Merci Rapolti, a graduate student in the School of Environment and Sustainability, is helping Morrissey set up a framework for monitoring the shorebirds that will add information to what is already known. It has to be simple enough for people to use but it also must produce information "that is consistent in a given year and between years so the data are comparable," said Rapolti. That means controlling factors like the timing and locations of counts.

But it is more than just counting, she explained. Also important is gathering, for example, the chronology of when various species of birds arrive and depart, and how long they stay at the site. In separate research, Morrissey has banded birds that use Chaplin Lake so watchers will also be asked to report those sightings as a way of studying migration patterns and survival rates.

"It's an opportunity to collect real, valid, useful scientific information, and it doesn't matter if you're a scientist," said Morrissey.

This year's work centres on testing and validating components of the framework, said Rapolti, with full implementation of the "citizen science" project expected for next year's migration.

Morrissey and Rapolti are working with Lori Wilson from the Chaplin Tourism and Nature Centre on the initiative. Morrissey said Wilson is keen to involve school students in the survey process, the selling point being the chance to do hands-on, in-the-field research work.

"The community is thrilled to have scientific research at their site, full stop. They're 100 per cent on board."

Morrissey and Rapolti will be in Chaplin June 6-7 for the annual Chaplin Shorebird Festival to promote their research and the monitoring project. They will be joined by researchers from Mexico and Salt Lake City, other areas where the birds are monitored "so the U of S is on the map for people who care about these birds," said Morrissey.